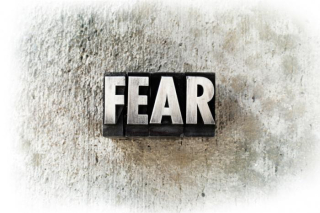 Living in fear is exactly what healthy religion seeks to counteract. Why else is the phrase "Fear not" the very first thing angels learn in angel school? (You could look it up.) Fear churns up our worst instincts. It moves us toward security measures that often make the threat of harm even worse.

Which is no doubt why North Korea's leader, Kim Jong Un, at this past weekend's parade of military hardware, showed off what appeared to be previously unknown intercontinental ballistic missiles. He wanted the world to shudder. Which is mostly what the world did. (Though the North Korean missile test failure was a bit reassuring.)

In his new book, Be Still!: Departure from Collective Madness, the Rev. Gordon C. Stewart writes about the Genesis story of Cain murdering his brother Abel by noting that "It is the bloody parable in whose ink humankind's history is written." (Look for a more complete review of this book later this week here on the blog.)

Would that Stewart were wrong. But he's not. Fear and resentment and pride and a hunger for power and wealth have led humanity to be butchers of ourselves. As one of my college English professors once noted, back in the early days of humanity you sometimes could outrun arrows shot from bows. But with nuclear weapons and explosive devices labeled "Mother of All Bombs," we have no chance of running away.

The savage history that makes up humanity's story is, indeed, written in the ink of Abel's blood. Which makes it all the more remarkable that we seem to learn so little from that metaphorical story. Instead, we jack up the defense budget. We parade around frightening new missiles and terrorize even ourselves. What the poet W.H. Auden in "September 1, 1939" called a "low dishonest decade" has in many ways become a low dishonest era.

So the cries for peace and sanity coming from religion must continue even if they sometimes seem fruitless. They are almost the only thing that is keeping us human and sometimes humane. The forces of fear are pervasive and often persuasive. People of faith are up against a strong enemy -- and often that enemy is us.

A WORD ON BEHALF OF FAITH

One of the religious voices speaking a word of hope and encouragement belongs to Pope Francis. On Easter Sunday he even went off script a bit to say a word about the need for faith "in the midst of so many calamities." You and I have prophetic voices, too. Let's use them.