This spring will mark the third annual week-long commemoration called "Seven Days," begun a year after the 2014 shootings by a neo-Nazi at Jewish establishments in the Kansas City area that killed three people, William Corporon, his grandson Reat Underwood and Terri LaManno. 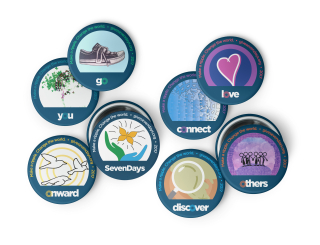 Mindy Corporon, who lost her father and son at the Jewish Community Center shooting, has worked with the LaManno family to create opportunities through Seven Days for Kansas Citians to join together and stand against the kind of perverse hatred that led the gunman to try to murder Jews (though the three people he wound up killing were Christians).

She has devoted enormous energy and time to open up dialogue and to find ways to promote generative values.

I asked Mindy three questions about this year's events. Here are the questions and her answers:

* How will this year's events differ from those of previous years?

We are celebrating our competition winners on our first day, the Day of LOVE rather than announcing them at the very end of the week. This provides us the ability to promote these students all week to guests attending other events. They will be awarded and announced during the evening event at B’nai Jehudah on April 18th. Our education piece for that evening is Rabbi Art Nemitoff, Pastor Scott Chrostek and Imam Sulaiman Salaam Jr.

We added a mental health workshop to our mix of activities. Mental health doesn’t lend itself to interfaith or kindness, people might think, but we are seeing so much anxiety in our community, our children and even many adults (so) we decided to take this step to talk openly about anxiety and depression, in particular. Saturday, April 22, The Church of Jesus Christ of Latter-day Saints is hosting our Improv Youth Workshop and our Train the Trainer (read as adult) Improv Workshop. Mental health spans all humans no matter the race, ethnicity, or religion. We need to speak about how to better care for ourselves and our loved ones. This workshop is an approach to engage the community in a cross section of people but who hold the same concerns for the high rate of teen suicide.

* What are some of the things you have learned in all the time you've devoted to this since 2014?

The role I am in as founder of SevenDays is much like being the co-founder of Boyer & Corporon Wealth Management.

* How are you different from the Mindy you knew before the shootings and how have you seen others grow and change because of the way you responded to this catastrophe?

Actually, someone asked me this same question last night and the answer that came to me was “I found my voice.” We all learned as children to not talk about politics or religion with others. If find myself talking about both often and publicly. I am pushing myself INTO the path that God is placing before me. I pray much more often, I journal more often, I take 5 minutes here and there to settle my mind and LISTEN. I know that God talked to me on April 13th (of 2014) and I have learned to share this with confidence rather than be ashamed or worried people will think I am crazy.

I am following what many would say is “my heart”. What is going on in my heart are the stirrings of God’s path…following God’s path gives me peace. I lean into it more than I ever thought possible and it gives me peace…same sentence, sort of but saying it a different way.

Seven Days has been a gift to this community, a bit of gold drawn out of the dross of disaster. The Seven Days organization now is working with such groups as the Kansas City Interfaith Youth Alliance and others to educate the community about values that build up so they can counteract thinking and actions that destroy.

Here is a list of events for this year's Seven Days activities and programs, which start April 18. I hope to see you at some of them.

CAN RELIGIOUS INSTITUTIONS MAKE UP THE DIFFERENCE?

If federal budget cuts reduce or remove assistance to poor people, can faith communities fill the gap? This Atlantic piece concludes that the answer is almost certainly not. Despite the fact that religious congregations often are quite generous when it comes to helping people in poverty, the scale of the problem would simply overwhelm them if government assistance disappeared.