Home Archives Profile
The community's challenge after Olathe: 2-28-17
What if the FBI is religiously illiterate? 3-2-17

One of the ancient issues with which theologians struggle is the idea of grace, which many Christians would describe as pure, unmerited favor. The idea is that this is what God gives us even though we don't deserve it, can, in fact, do nothing to deserve it and cannot repay it. 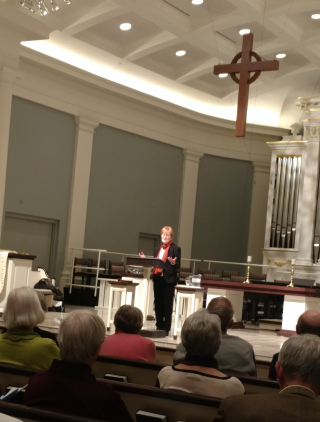 The subject came up again this past Friday evening when I went to Village Presbyterian Church in Prairie Village, Kan., to hear Baylor University professor of New Testament Beverly Roberts Gaventa (pictured at right), this year's visiting scholar at the church.

I will save perhaps for another time something I think Gaventa doesn't get quite right -- it has to do with anachronistically referring to members of the First Century Jesus Movement as Christians when there was no such religion yet. Instead, I will share with you some of her interesting thoughts about grace (a word she said means, in Greek, simply gift) because I think it speaks to something we Americans often get wrong in our culture.

In society in the time of Jesus, she indicated, the practice was to give gifts, but it had to do with reciprocity and the worth of the individual to whom gifts were to be given. You gave gifts only to people who could be of some use to you. That is, the giver of a gift would expect some kind of gift in return later because the person to whom the gift was given received that gift only because everyone understood that gifts were to be repaid.

Later, especially because of the writings of the Apostle Paul, the idea of grace began to be understood more broadly, and with it the understanding that some gifts cannot and should not be repaid. Rather, they come out of the generous heart of God and we must learn to be unworthy recipients.

But in the U.S. today, Gaventa said, "Our culture is committed to the idea that we should get what we deserve but nothing more. We're afraid we aren't worthy of what we have." A sense of our own unworthiness can make it hard to love ourselves and that makes it next to impossible to obey the foundational religious command to love our neighbor as ourselves.

This pinched idea about generosity and grace means that we keep at least informal ledgers. You know: Should we send them a Christmas card this year? After all, they didn't send us one last year. Or: They've had us over to dinner twice since we've had them over, so we owe them one. (Grumble, grumble.)

Some of the concern expressed in such questions, of course, is a measure of simple courtesy and of living in a way that doesn't take advantage of people. But keeping accounts strictly soon can degenerate into a kind of rigid score-keeping that negates the radical idea of grace and love.

Grace can be a difficult concept, especially when we feel unworthy. And one way to feel unworthy is to pay strict attention to religious messages that suggest we are so indelibly stained by our own sin that we are outside the reach of real grace. Yes, we all sin, but the message of all the world's great religions is that redemption is available -- and that it's free. It's not cheap, but it's free. Not being cheap means that our redemption places on us the responsibility to live a life of radical gratitude. When we do that, we become channels of grace and cause others to wrestle with what that unmerited favor means.

But if we have to have our thinking complicated by something, what better something than grace?

When I was in Poland in 2007 doing interviews for the book that Rabbi Jacques Cukierkorn and I wrote (They Were Just People: Stories of Rescue in Poland During the Holocaust), we saw lots of evidence of ruined and abandoned Jewish cemeteries. Indeed, the Nazi invaders from Germany in World War II often took headstones from such cemeteries and reused them to pave streets and for other sacrilegious purposes. In the U.S. recently we have been experiencing antisemitic attacks on Jewish cemeteries, a disturbing echo of those toxic Nazi days. And as this Forward piece notes, if this trend continues the cost of safeguarding sacred Jewish burial space is going to be high. Let's work against it coming to that. (By the way, here is the JTA story about why Jewish cemeteries make easy vandalism targets.)