Home Archives Profile
Arguing about the death penalty civilly: 2-27-17
Why grace is so hard to accept: 3-1-17

The community's challenge after Olathe: 2-28-17 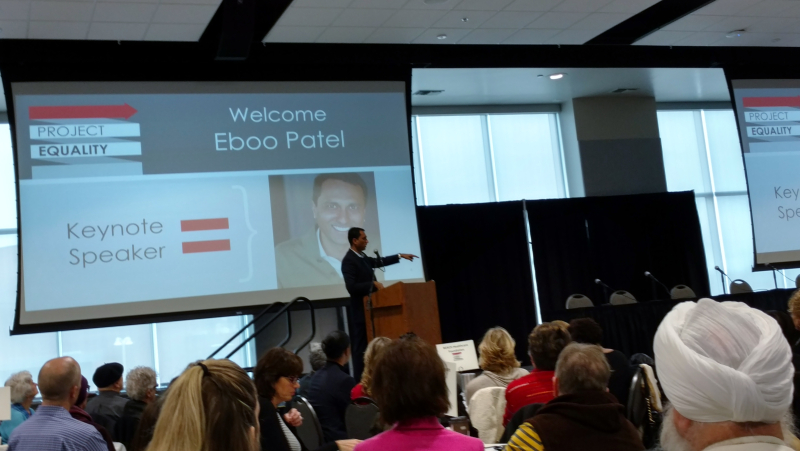 It was odd that just two days before Project Equality's "2017 Diversity and Inclusion Summit" last Friday the Kansas City metro area was rocked with what appeared to be another hate crime, the murder of one man and the wounding of others at a bar and grill in suburban Olathe.

If the now-arrested suspect turns out to have gone after his victims because they were from India and/or were Muslims, the summit's message of diversity and inclusion clearly was one he had not adopted as his own.

But the summit's keynote speaker, Eboo Patel (pictured above), was right to say that what will define the KC area in the aftermath of such evil is not the evil itself but our long-term response to it. Patel's Muslim parents came from India, so he felt the Olathe story in deeply personal ways.

"This is a day of grief," said Patel, founder and leader of the Interfaith Youth Core, "and I don't want to diminish that." But, he said, it's also a time to think about how to build a community that not only stands against hate crimes but that teaches its members to live by values of inclusion, diversity and love. This, he said, requires a lot of work and a social architecture that will not build itself.

This, of course, is just what Mindy Corporon has been working on since a neo-Nazi murdered her son and father at the Jewish Community Center in 2014. Her Seven Days organization will sponsor another week-long series of events in April to help teach people how to combat attitudes that lead to such violence. And her youth board is joining now with the Kansas City Interfaith Youth Alliance to educate and involve high school students in the work of teaching respect.

But there is so much more to do to build bridges between and among people of different faiths, races and ethnic backgrounds.

One reason Patel is optimistic that Kansas City and, in fact, the U.S. itself can become harmoniously diverse is that, as he said, the U.S. is "the most religiously diverse nation in human history." Beyond that, he asserted that America was designed to be diverse. Which, he said, meant that unlike European nations at the time of our nation's founding, America was envisioned by the people who designed it to have both democracy and religious freedom. That's why it was called the American Experiment. (My friend Vern Barnet, a Kansas City interfaith leader, appreciated much of what Patel said Friday but disagrees with him about how America was designed. You can find Vern's rebuttal here.)

So far, that experiment hasn't failed. But it's still an experiment and sometimes it shows frightening signs of fragility. Acts of violent hatred can shatter the confidence we want to have in the on-going success of the American Experiment.

Patel challenged Kansas Citians to build social systems that can support efforts at religious literacy and compassionate responses when disasters happen to people of any faith tradition here. This will require relationship skills that can defuse trouble before it starts and that can work for justice and mercy when trouble comes.

We can do this, Kansas City. Really. We can.

The Christian season of Lent starts tomorrow with Ash Wednesday, and, like much else in life, the internet and related digital tools are playing a larger role, this RNS report says. Sort of makes you wonder how Christianity in its early days grew without its own Facebook page.