Is the celibate Catholic priesthood nearing an end? 1-25-17

From time to time in the Catholic Church, the issue of a celibate priesthood gets lots of attention -- and then sort of dies away as the current system stumbles on despite the shrinking numbers of those ordained. 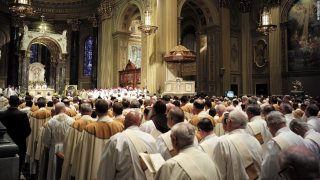 But as this Economist analysis notes, the issue soon may not be avoidable. Cries for change -- from priests themselves -- are being heard here and abroad, and the movement to allow married priests seems to be gaining serious momentum.

Although worldwide the church itself is holding its own and even growing, ". . .the priesthood," the article reports, "with its hard calling of celibacy, is in freefall in many places. In America, the number of Catholics connected to a parish has risen over the past half-century from 46m to 67m, while the number of priests has fallen from 59,000 to 38,000. In France, about 800 priests die every year while 100 are ordained. Priest numbers there have fallen from 29,000 in 1995 to about 15,000. On present trends they may stabilize at less than 6,000."

Some men and women experience a true call to celibacy and to being religious leaders. Celibacy, in this sense, is a spiritual discipline that many believe is a divine gift that allows those who have it to be married, in effect, to the church.

But as the Economist story notes, some older priests now are saying that they agreed to this form of life because the church demanded it, not because they chose it.

In fact, the church already has some married priests. In the U.S., they are former Episcopal priests who converted to Catholicism after already being married and have been allowed to remain married. (I did a story about one such man in Kansas some years ago for The Kansas City Star.) There also are married priests in Eastern-rite Catholic churches.

The chances of the church changing the rules on celibate priests is much higher than it is for ever allowing female priests. But despite the current attention to the celibate priesthood, change appears to be quite some time away.

A new film in Egypt that is critical of the too-close relationship between Muslim leaders there and the state has caused a big controversy. No surprise. It's what happens when fiction speaks truth, as it sometimes does more clearly and more forcefully than non-fiction.