The quadrennial presidential inauguration and the annual March for Life (to protest the U.S. Supreme Court's 1973 Roe vs. Wade decision legalizing abortion) now are behind us, and it's time to try thinking in ways that may seem a little contrarian. 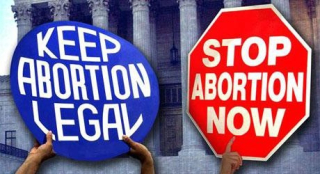 For instance, some Hillary Clinton (and good for her for showing up to witness Donald Trump's inauguration) supporters may be surprised, but the sun has come up for three straight mornings after Trump became president. So maybe it's time for some of them to acknowledge that this may happen every single day for four years.

As for Roe vs. Wade, this New Yorker piece makes an interesting case for why Republicans might regret it if the Supreme Court eventually really does overturn that case and pull the constitutional rug out from under abortion.

Why? In a word, it has given them an emotional issue to run against. As the article says, "for the conservative movement, Roe has not been such a bad thing. Conservatives may indeed benefit more from Roe’s preservation than from its being overturned.

"The most direct beneficiaries of Roe have been women of all political persuasions, whose right to control their own bodies and to avoid forced childbirth was not recognized before the ruling. But conservatives have also reaped benefits since the late nineteen-seventies, when strategists like Paul Weyrich, the co-founder of the Moral Majority, shrewdly recognized that social issues like abortion could broaden the Republican Party’s base beyond the business class. 'Yes,' social issues 'are emotional issues, but that’s better than talking about capital formation,' Weyrich said. As the recent election showed, this strategy can yield dividends even for candidates who have never seemed especially moved by the plight of the unborn. For much of his life, Trump described himself as pro-choice. He was more likely to be spotted at a night club than at a pro-life rally. All of this changed when Trump ran for President, at which point he began courting evangelicals like Jerry Falwell, Jr., and rebranding himself as a committed right-to-lifer."

Abortion has been one of the most divisive issues in American political history, and part of the reason is that many of the opponents have claimed to be speaking and acting on God's behalf. That is, they have been certain that abortion is always and everywhere a deep evil and sin.

When you know exactly what God thinks about complicated social issues, it's hard not to feel smug, not to believe those who disagree with you are tools of the devil.

At any rate, just as the barking Trump dog has caught the presidential car he's been chasing and now must figure out what to do with it, so, too, will Republicans who oppose abortion have to figure out something else to be against if the Supreme Court some day removes abortion from their list of evils to oppose.

A GOOD PAPAL APPROACH TO TRUMP

Pope Francis says he will reserve judgment on Donald Trump until he sees what actions he takes. It's exactly the right way for everyone, including politicians of all stripe, to approach any new president, though it rarely happens that way. And the new president doesn't encourage people to take that stance when what comes out of his mouth and his Twitter account is unnecessarily provocative. Still, what matters is action, more than intentions and more than words.