A primary argument in my new book, The Value of Doubt, is that we miss much of the meaning of sacred writ if we take it all literally and imagine that it has no historical, scientific, economic or other kinds of errors in it. 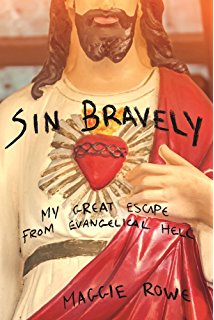 In fact, if we get locked into a strict literalistic interpretation of the Bible and a vision of God as a vengeful authority figure without compassion, it can so discombobulate our thinking that it can create what looks for all the world to be -- and may actually be -- mental illness.

Exhibit A of that statement is Maggie Rowe, author of Sin Bravely: A Memoir of Spiritual Disobedience, which is to be officially published Jan. 10 but is now available for pre-order at the Amazon site to which I just linked you. (The subtitle I have on my review copy apparently has been changed to the one you see in the graphic here today: "My Great Escape from Evangelical Hell." I prefer the former one in that the latter seems to slam all evangelicals without regard for the variety of theological thinking among people who choose to call themselves evangelical.)

Maggie grew up in a household it would be fair to describe as conservative or evangelical Christian but not rigidly fundamentalist. And yet from the church teachings of her childhood she somehow came to understand God as a strict, by-the-book rule giver and disciplinarian who would be satisfied with nothing less than spiritual perfection. No one, of course, is capable of that, so, her church taught her, all she had to do was to say the "Sinner's Prayer" in which one confesses one's sinfulness and accepts Jesus Christ as personal savior. The underlying theological theory of atonement here is that Jesus has paid off God's wrath with his death on the cross.

As Rowe writes, ". . .there was a very specific prayer that needed to be said with a very specific attitude. . ." But, she worried, how can one ever know if she has prayed the prayer correctly with no guile in her heart?

"I decided," she says, "that the more I dedicated myself to Jesus and learned what the Bible said, the safer I would be. The more I tilled the soil of God's verses, the more likely it was that genuine faith would blossom inside me."

Theologians call Maggie's approach "works righteousness," which means one believes one's good works can earn eternal salvation. The teaching of the universal Christian church, however, countermands that and says people are saved by grace not by works.

Little Maggie had something else working against her: She seems to have been obsessive and compulsive about many things, and this seems to have transferred over to the way she thought about faith as she worked to prevent her eternal destination from being hell.

"To prevent tooth decay," she writes, "I brush my teeth for the dentist-recommended ninety seconds per quadrant. Every night. To prevent corneal irritation, I soak my contacts for a minimum of eight hours. . .I wash my hands before every meal, always digging my nails into the soap at the end, an added protection against the bacteria that might be lurking. I've always been this way."

So it's no surprise that at age 19 -- after a terrible experience while attending a play -- she finally checks herself into a Christian-based psychiatric unit, where one of the doctors diagnoses her as having a severe case of "scrupulosity." Which means she drills down into the tiniest detail to look for a flaw in her religious reasoning, and in so doing she closes herself off from accepting the possibility that God loves her as she is. As a counselor tells her, scrupulosity "involves a groundless fear of sinning." Another counselor tells her she has "a particular brand of scrupulosity. Something that has been called 'soul weighing,' a question of whether grace is sufficient."

The vision of God that literally terrified Maggie was this: "God was a big security camera in the sky whose feelings were easily hurt. He was a jealous God, capable of bitter, barbaric revenge." The fact that God also is described in the Bible as loving and caring seemed lost in all of this. And, as she notes, "It's just hard to know what is a metaphor and (what is) literal. It all seems to be mixed up together, which would be fine if I didn't think my literary-interpretation skills impacted my eternal fate."

What a burden she placed on herself. It drove her nuts.

And some of the help she got from counselors wasn't helpful at all. One of them, for instance, insisted on this: ". . .in the Bible, which is God's inerrant Word, God is clearly described as male." This particular counselor also misdiagnosed Maggie as being bulimic, as being a lesbian and as having other issues that weren't the problem. But other counselors were, in fact, quite helpful and eventually, after three months in the psych center, Maggie, while never acknowledging that she's "cured," is healed enough to get on with life without constant anxiety about going to hell.

She has gone on to perform in and produce the Comedy Central stage show, "Sit 'n Spin," and has written for such shows as "Arrested Development" and "Flaked." She's now also married to a writer.

So it's a fascinating book that explores the trouble that people who are naturally anxious can get into when they subscribe to a literalistic view of religion.

What I found troubling about the book was not at all the humor in it, and there's plenty. And that works well. Rather, I found that the long passages directly quoting other patients in the psych unit and quoting counselors at length were hard to believe in a literal way. She was mentally unbalanced when all that was taking place in front of her and surely was not taping all these conversations. And yet nowhere in the book do we get any kind of statement that says she's recreated the scenes as well as possible from memory or that the names she uses are not the real names of other patients of physicians. That kind of disclosure would have gone a long way to help me understand how the book was put together as non-fiction.

Perhaps that's just the journalist in me who wants to be clear about sources and means of information collection, but a brief explanation was called for. And readers don't get one.

And yet there is a deep honesty here about what has taken her down this destructive path. At one point she writes that "I hate Christians. I wish I didn't have to be one. I don't like being part of this group who thinks all other groups will lose out in the end." (Which, of course, is a description of just a certain type of Christian, but certainly not all Christians.)

What, in the end, seems to help is that she begins to accept something that one of her counselors tells her: "Uncertainty is here to stay. You might as well shake hands with it and invite it to the party."

As I write in my own book, "The opposite of faith is not doubt. The opposite of faith is certitude. Doubt creates the space in which faith may live. Certitude kills faith. It turns faith into a rigid caricature of itself, a Madame Tussauds' wax figure of the real thing. It may, from a distance, look genuine, but no real blood runs through it. There is no health in it. As much as its holders might pretend that it is vibrant, it is, in fact, comatose."

YES, I HAVE A BUDDY WHO TALKS TO GOD

I love it every year when my friend Stu Bykofsky, a columnist for the Philadelphia Daily News, does his annual interview with God. Here is this year's version, in which we discover that God is on medical marijuana to relieve symptoms of lumbago. Enjoy. (And don't, for God's sake, take it literally.

P.S.: My oldest sister, who lives in Berkeley, Calif., sent me a note late Friday night that Huston Smith, a Berkeley resident and the great scholar of world religions, died Friday morning there. He'd been in hospice care for some months. He was a terrific man whom I once got to hear speak in Kansas City and he was a wonderful advocate for interfaith understanding. Not only that, but he has Missouri connections. As of late Friday night Smith's website still reported that he was in hospice care and weak. By Sunday, The New York Times had published this story of his death. And I expect to write about him here on the blog in a few days.