It must now be 25 years ago that I judged a writing contest for the Evangelical Press Association. 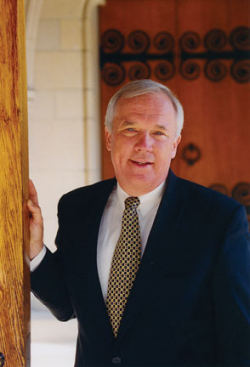 In the midst of some fair-to-middlin' writing and some indigestible junk, I found a lovely piece by Will Willimon (pictured here), who at the time was dean of the chapel and professor of Christian ministry at Duke, and I gave him the top award. Willimon's career as a United Methodist leader has taken him hither and yon since then, but today he's back at Duke Divinity School as professor of the practice of ministry. The blog he writes is here.

It turns out I saved the Willimon piece from back in 1991 and I just rediscovered it as I've been thinning out stuff that over the years has collected in plastic bins in my basement.

I want to share a bit of it with you today because it's still on target. He wrote it about what he wants Duke students to feel and understand when they attend Duke Chapel, which he describes as "Gothic, massive and dark. It makes you feel small. The organ thunders. The space overwhelms you." (I agree. I've been in that chapel.)

He keeps stomach medicine for himself close at hand because the chapel always makes him uncomfortable -- which is exactly how he wants students to feel when they think about God.

"Some Sundays," he wrote, "even though we've got everything planned and the order of worship all nailed down, the Almighty still manages to reach in here, grab us by the neck and shake us."

But, he wrote, such worship is not common today: "We upholster churches like great carpeted living rooms, where every hard edge is cushioned and preachers pad around in slippers lest someone be even mildly disturbed.

"Mostly, we exit church no different from when we entered, once again reassured that God is silent, or, if not silent, at least speaking in a voice that sounds like our own. . .God: good friend, cheap therapist."

Author Annie Dillard once wrote something quite similar about God in one of her essays: "On the whole, I do not find Christians, outside of the catacombs, sufficiently sensible of conditions. Does anyone have the foggiest idea what sort of power we so blithely invoke? Or, as I suspect, does no one believe a word of it? The churches are children playing on the floor with their chemistry sets, mixing up a batch of TNT to kill a Sunday morning. It is madness to wear ladies' straw hats and velvet hats to church; we should all be wearing crash helmets. Ushers should issue life preservers and signal flares; they should lash us to our pews. For the sleeping god may wake someday and take offense, or the waking god may draw us out to where we can never return."

And yet the domestication of God has continued in countless ways. But Willimon says the real God, the God who is "not some pale, idolatrous projection of our ego" sometimes can be seen driving "people out of graduate school and into the jungles of Honduras. I've seen people repent of their behavior even in a world that lives by 'if it feels good do it.' I've seen it!"

The balancing act, of course, is to understand the wholly and holy otherness of God even while not creating in our theological heads an angry God who wants to send us all to hell unless we say certain words of commitment.

When you get that balance right, let me know.

MORMONS NOT SURE THEY WANT TO ASSOCIATE WITH TRUMP

When it was announced that the Mormon Tabernacle Choir will perform at Donald Trump's inauguration, I half expected some complaints from Christians who think Mormonism is a cult. But it turns out the ones complaining are Mormons who don't want it to appear that Mormons are giving their approval to the Trump administration. A satiric reversal if I ever heard of one.