In important ways, theology is, inevitably, an arrogant and even foolish pursuit, given that there is no possible way our finite minds can come close to grasping the infinite. 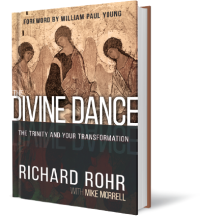 And yet something in us -- something honorable, perhaps even God-given -- seeks to discover answers to the eternal questions about origin and especially about purpose. Science, math and other disciplines can answer many things for us but never the question about the purpose of life. Religion tries to answer the purpose question, but its answers always must be regarded as human efforts that may be wrong.

Many people who either commit themselves to theological study or who at least find ways to wrestle with theological questions are sincere people simply seeking to make sense of life and not to use what they're learning for personal economic or social advantage.

One such person is a Franciscan priest named Richard Rohr, who has made quite a name for himself as an author and founder of the Center for Action and Contemplation in New Mexico.

His latest book is The Divine Dance: The Trinity and Your Transformation (co-authored with Mike Morrell), and I want to quote a brief passage from it because it says so well what I try to say when I urge people to be cautious about using language that seems to draw rigid theological conclusions:

"Our speaking of God is a search for similes, analogies, and metaphors. All theological language is an approximation, offered tentatively in holy awe. That's the best human language can achieve. We can say, 'It's like -- it's similar to. . .," but we can never say, 'It is. . ." because we are in the realm of beyond, of transcendence, of mystery. And we must -- absolutely must -- maintain a fundamental humility before the Great Mystery. If we do not, religion always worships itself and its formulations and never God."

Rohr is not arguing -- and, in my new book, The Value of Doubt, I am not arguing -- that it's never possible to make a faith commitment, to draw at least a provisional conclusion about God, about spiritual matters. Everyone does that in some way or another, even atheists and agnostics. Nor are we saying that it's foolish to commit oneself to living out a particular faith, to act as if you believe what you say you believe.

But both Rohr and I think it's essential to remember, as I point out in my book, that all language is metaphorical, pointing beyond itself to something else. So we should have some humility about drawing hard conclusions when it comes to matters of the spirit, of the divine.

Imagine all the trouble over the centuries that the world would have been saved had everyone shown that kind of theological humility as opposed to the false certitude (surely an idolatry) we often see. Imagine.

JUDGING BY COLUMN INCHES OF PRINT

A new poll shows that most Americans still think religion is really important, though the number of people who describe themselves as religiously unaffiliated continues to rise. But you couldn't tell how important people think religion is if you were to judge by how much coverage the media devote to it. Instead, you'd think the most important thing of all was either sports or politics.

The Complete Encyclicals, Bulls, and Apostolic Exhortations, Volume 1, by Pope Francis. Whatever else you might say about this pontiff, there is no doubt that he has been prolific in his writings and speakings. I might even argue that he's been a more modest theologian than either of his two predecessors, John Paul XXIII or Benedict XVI. This volume, being released today, offers readers a collection of his most important words since he assumed the papacy in March 2013. If I were to judge what will be seen as his most important work -- at least so far -- it would be the encyclical called Laudato Si' about saving the environment. And that's certainly part of this collection. It's not a fancy book full of photos and illustrations. It's basically the texts, but in an easy-to-read font size. Catholics -- and others -- serious about understanding what this remarkable pope is bringing to the church will want a copy of this revealing book.