For Christians, the incarnation that happened at Christmas (no matter when it really occurred on the calendar) is, in the end, about love and grace and understanding that God is compassionate. 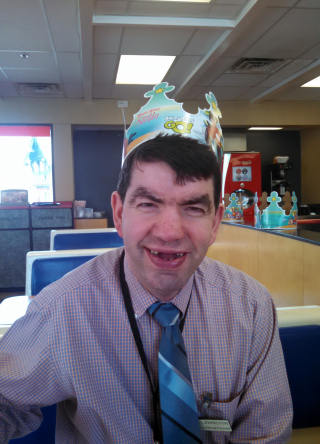 What all that means must be unpacked by each follower of Jesus, but surely it means that we must do what Jesus told us to do in Matthew 18:3, and that is to change and "become like children." That doesn't mean becoming ignorant or foolish. It doesn't mean staying uneducated or immature. What it means, I think, is being open to love, open to the goodness in the world. It means believing the best about others, even if, as adults, we've been almost relentlessly disappointed in others and even in ourselves.

The one person I know who best exemplifies that trait of open innocence and willingness to love by thinking the best of others is my stepson Chris, a special needs adult in his 40s. Chris lives in a group home and works at a sheltered workshop. He's a member of our church, and he pretty much just wants to give everyone a hug -- especially when he ushers there once a month.

In the picture at left, you see Chris in early 2015 when I took him to Burger King for lunch one day and crowned him. It pleased him to be king for an hour, though I want you to know that he didn't issue any confiscatory decrees or, as kings are wont to do, send any armies out to capture additional real estate.

He just wore the gift of a crown and smiled.

It would be easy to romanticize people with developmental disabilities like Chris and make them into perfect examples of moral virtues. I don't want to do that because nobody is a perfect example of moral virtue, except, Christians would say, Jesus himself. Rather, I want to acknowledge the problems Chris has in life and especially acknowledge the powerful and admirable love and care his mother, my wife, has given to Chris all his life, but especially from the time he developed a seizure disorder as a toddler. Marcia is simply remarkable as Chris' mother.

Romanticizing developmental disabilities is sort of like romanticizing poverty. It's demeaning and it paints a false picture of the realities of the lives of those affected by it. Beyond that, it stops efforts to find causes and undo them.

And yet I have come to understand that there is something phenomenal about Chris and about how he has a capacity for giving and accepting love, which means being open to the core of another person's being no matter the status of that person.

The name Christopher means Christ bearer. Each follower of Jesus is called to be a Christ bearer to others. Most of us fail at that every day, sometimes in terribly destructive ways. If each of us could do as well as Chris in being a Christ bearer for others, the problems of this world might simply melt away into the longed-for peace for which the Prince of Peace stands.

CHRISTMAS AS A PROPHETIC CALL

And here's a Christmas challenge from a Catholic writer: "It’s tempting to turn Christmas into a safe holiday that asks little of us. But that would ignore the prophetic, subversive life of Jesus. Christians honor him on this holiday — and the rest of the year — only if we risk the scorn of the powerful to stand with the undocumented immigrant, the Muslim family viewed with suspicion, the refugee fleeing injustice." Well, unless all that is more than you or I can handle, in which case we can just go back to sweet carols, gift cards and fake trees. You know, ding dong merrily along.