Another thing each Christmas season brings is a report about the state of life and tourism in Bethlehem, a few miles from Jerusalem. (The new version of the Christmas carol, by the way, is, "O Little Town of Bethlehem, on the Occupied West Bank.") 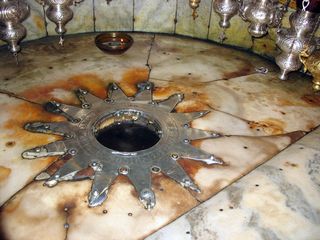 This year the news is better than in some recent times -- at least for this Christmas season. The Reuters piece to which I just linked you reports that "Bethlehem really can boast again that there is no room at the inn, as relative calm in the Israeli-occupied West Bank brings pilgrims and tourists flocking to the town of Jesus's birth."

Tourists are filling the 5,000 rooms in the city's 46 hotels. And the Church of the Nativity is full of pilgrims. (However, for the longer term, lots Christians are leaving Bethlehem, as this piece reports, and the future is uncertain.)

All of which is a reminder of a couple of things:

First, that the Israeli-Palestinian conflict continues, with no resolution in sight. And, as I reported here recently, there are diplomats and others who seem to be giving up on the idea that a two-state solution will ever work. Barring some miraculous development in the next few weeks, the diplomatic questions about all of this from an American perspective will fall to the incoming Trump administration.

A second question the annual Bethlehem news story raises is whether Bethlehem really was the birthplace of Jesus. The evidence for it is slim, but it long as been accepted as tradition in Christianity, and no one seems very interested in upending that tradition. I've been to Bethlehem twice in my life -- once on Christmas Eve of 1957 (when it was still in Jordan) and once in the spring of 2012, when I took the photo you see here of the glass and metal star placed in the grotto of the Church of the Nativity on the exact spot (that's what tourists are told) of Jesus' birth.

All of that, again, calls into question why some people think the Bible should be read as literal history. I won't get into all that again today except to say that if you think the Bible is inerrant historically, scientifically and in all other ways, you're missing a lot of the point of the book. Sigh.

NOT MONKEY BUT MONK BUSINESS

Do you buy monk-made fruitcakes from Assumption Abbey in Ava, Mo., this time of year? You're far from alone, as this NPR story attests. My good friend Fr. W. Paul Jones is a Catholic priest and Trappist monk attached to Assumption Abbey, though he spends just one week a month there. The other three weeks he's the resident director of the Hermitage Spiritual Retreat Center in Pittsburg, Mo., on Lake Pomme de Terre, a center on whose board I serve. (You can find the center's Facebook page here.) Paul tells us that the abbey has invited in a community of Vietnamese monks to live there and rejuvenate the community, and it's become an increasingly lively place.

P.S.: Please put it on your calendar. I will be speaking from 9 to 11 a.m. on Jan. 14 at Second Presbyterian Church about contemporary spirituality, based on my new book, The Value of Doubt: Why Unanswered Questions, Not Unquestioned Answers, Build Faith. I'm the third speaker in a four-part series, and we'll have contemplative fun with PowerPoint photos, YouTube videos, music tracks amid words from me and then your questions. Tickets are required (they're cheap) and you can get one here. I hope to see some of you that Saturday morning.