Home Archives Profile
Does God also love aliens from other planets? 12-20-16
Things looking up for Bethlehem? 12-22-16

The ripple effects from the Holocaust are endless. Often they are personal and painful, as survivors remember those who were murdered by Adolf Hitler's Nazi machinery of death and who tell their own stories of escape. 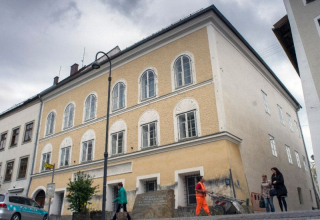 But sometimes they are more symbolic, raising questions about how to commemorate what happened, how to remember those responsible, how to interpret history and theology in light of Germany's policy of murdering all the Jews of Europe -- a policy that was two-thirds successful, resulting in about six million Jewish deaths, to say nothing of millions more who perished because they were gay or gypsies or Polish intelligentsia and others.

A nagging symbolic question for some years has been what to do with the house in Austria in which Hitler was born (seen in the photo at left). Should it be a museum about the leader of the Third Reich? Should it be devoted to Jewish causes? Should it simply be torn down?

The Austrian government has now answered that question by deciding to seize the property and let it be used by a charity that cares for people with learning disabilities.

In some ways, many of the Austrian people -- and certainly some of its leaders -- might be said to have suffered from a learning disability, which is to say their failure to learn how they themselves supported the evil that Hitler enacted on the world.

As the Christian Science Monitor piece to which I've linked you reports, "The question of what should become of the house had raised tough choices for Austrians, whose understanding of their country’s role in World War II has only in recent decades shifted toward an acknowledgment of involvement in the Third Reich’s crimes. And it seems to underscore the importance of the public's understanding of its country's history and what that means for the present."

Austria's support for the Nazis was deep and wide. As the Monitor piece notes, "until the early 1990s, the official story was that Austrians were simply the Nazis’ first victims, obscuring the truth of the way that Austrians received the German takeover, according to Winfried Garscha, a historian at the Documentation Center of Austrian Resistance in Vienna.

“'The majority of the Austrian population welcomed Hitler because for them it was a big event, the German chancellor invading Austria and coming here and bringing all those new promises of the Nazis, because Austria at that time was a very poor country,” he told the Australian Broadcasting Corp. in a 2015 interview.

“'The second reason was a very Austrian one. In Austria anti-Semitism was even deeper rooted than in Germany.'"

As the Hitler birth place finds a useful new life, I hope somewhere on the property its connection to Hitler will be noted. To forget is, after all, in some way to open up the possibility of history repeating itself.