Ever since I read this David Brooks column a few months back about J.D. Vance's book, Hillbilly Elegy, I've wanted a chance to see what it could teach me about what Vance calls families and a culture "in crisis." So I'm reading it now. 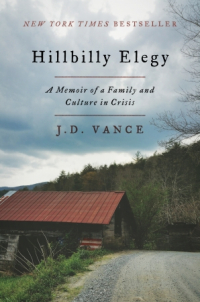 Brooks focused on this honor code implicit in the life Vance described: "I may not make a lot of money, but people can count on me. I'm loyal, tough, hard-working, resilient and part of a good community."

It's an admirable code, and although I did not, like Vance, grow up in Appalachia, I did encounter a similar code in northern Illinois in the middle of the 20th Century when I was a boy.

But Vance also writes about a different honor code from his boyhood, one that it's possible to find variations of in various religious communities today, a code that does enormous damage in many ways.

In writing about his grandmother, Vance says that "Despite her admonition not to start fights, our unspoken honor code made it easy to convince someone else to start a fight for you. If you really wanted to get into it with someone, all you needed to do was insult his mom. No amount of self-control could withstand a well-played maternal criticism."

That kind of honor code in Vance's childhood produces plenty of violence.

A similar code today in some cultures produces what have come to be called "honor killings." Although one still has to be cautious about the accuracy of Wikipedia entries, I think its opening description of these murders is pretty much on target:

An honor killing or shame killing is the homicide of a member of a family by other members, due to the perpetrators' belief that the victim has brought shame or dishonor upon the family, or has violated the principles of a community or a religion, usually for reasons such as refusing to enter an arranged marriage, being in a relationship that is disapproved by their family, having sex outside marriage, becoming the victim of rape, dressing in ways which are deemed inappropriate, engaging in non-heterosexual relations or renouncing a faith.

What is one true thing we can say about people who commit such honor killings, whether they be Muslim, Hindu, Christian or part of some other faith tradition? This: That they value honor more than they value life.

How sad. What a repulsive repudiation of core religious values. Which is another reason that honor and shame cultures cause so much trouble in the world and are so hard to change.

But as Vance's illuminating book shows us, such honor codes are not limited to strange cultures far away. We can find elements of them right here in the U.S., where they also cause almost nothing but trouble. Makes me wonder whether religious leaders in such cultures ever seek to unplug such codes or whether they're so deeply embedded that they don't even try.

PRAYING IN AND FOR JERUSALEM

Now and then one can find a vision of hope in troubled lands. Here, for instance, is a story describing how Jewish, Christian and Muslim leaders have brought together their congregations in Jerusalem for common prayer. It's a rare site and the people who organized it are of uncommon courage in a place full of strife.

P.S.: You are invited to join me at 6:30 p.m. tomorrow at the Plaza branch of the Kansas City Public Library, when I will introduce my new book, The Value of Doubt: Why Unanswered Questions,Not Unquestioned Answers, Build Faith. For a reservation to this free event, click here.