I am a fan of Leonard Cohen (pictured here), the singer-songwriter-poet who turned 82 last week. I can, in fact, sing you several verses of his famous "Hallelujah." Not well, but I know the words. 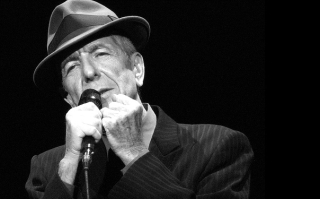 Cohen draws from his Jewish roots for his music, and "Hallelujah" is an example of that. It speaks, after all, of King David's life.

But this recent article in The Forward asks whether Cohen's newly released song, "You Want It Darker," is his most Jewish work yet.

The link I've given you will take you not just to the story but also to a 4-plus-minute clip of Cohen performing this powerful, haunting, challenging song.

The Forward describes "You Want It Darker" as "another plaint of a narrator addressed to God, asking why bad things happen to good people, why mankind suffers, and why God seemingly wants us to descend to the darkest depths before offering redemption."

Indeed, the song reflects one of the things I most admire about Judaism: Its adherents' willingness to challenge God, to demand that God be God, to argue with God.

Clearly, over history, some Jews have simply walked away from being religious, or Torah-observant. No doubt some of that has to do with the hard questions of theodicy, which ask why there is suffering and evil in the world if God is good. In the starkest terms, the question is where was God when millions of Jews were dying in the Holocaust. One of the Holocaust survivors my co-author and I wrote about in our book They Were Just People told us that the Holocaust killed any belief he had in God, though he still belongs to a synagogue for social reasons.

But Cohen, rather than abandoning such a puzzling God, uses his creative powers to describe what he senses: "You (God) Want It Darker." It's a description that insistently demands a response from God.

Cohen is voicing exactly the kinds of harsh questions that I suggest in my new book, The Value of Doubt, we simply must ask if we are ever to get to an authentic religious faith. There are helpful answers to Cohen's questions of God, but no one will ever hear those answers if the questions themselves go unasked or are suppressed by religious leaders who fear them. So good for Cohen for not fearing to ask such questions.

(I will be introducing my new book at 6:30 p.m. on Wednesday at the Plaza branch of the Kansas City Library. If you want to reserve a seat at this free event, just click here.)

REAPING WHAT WE SOW

When political rhetoric gets hot and divisive, bad things can follow. A Kansas City example is the attempt at arson at an under-construction mosque north of the river. Who thought such hateful actions would change anyone's mind about being Muslim?