Home Archives Profile Subscribe
Do Americans even read the Bible any more? 8-31-16
What difference did Wilder's Jewishness make? 9-2-16 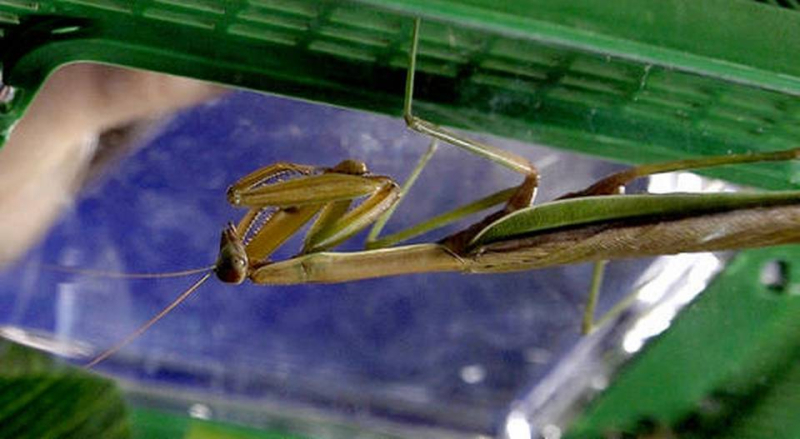 I was at the Royals' game Tuesday night. Yes, I went to see the team play, but mostly I was there to conduct journalism's first interview with Rally Mantis II (pictured here in a photo on The Kansas City Star's website). RM II is the praying mantis that many fans (some of whom now wear mantis heads) think has helped the Royals win so many games in August since Rally Mantis I (may he/she rest in peace) first showed up on Billy Burns' hat in the dugout.

I did not have a press pass, however, so I had no chance to do an in-person (in-insect?) interview, even in the hour-long rain delay (uh, through which I didn't stay). But no chance for a personal face-to-whatever interview, of course, was no problem. I'm a spiritual kind of guy, after all. So Rally and I communicated spiritually. It's how praying mantises (indeed how praying anybodies) prefer to communicate.

Me: What, pray tell, do you pray about?

RM II: Getting set free. I don't understand baseball. In fact, I dislike the game. I just want to go home and resume my monastic life. It's noisy around here. Silence is golden for insects in prayer. That's hard to find here.

Me: You mean you haven't really been a good-luck charm for the Kansas City Royals?

RM II: I have no idea. All I know is that I got stuck in this clear cage and that from time to time players try to kiss me. Now, I know that the Apostle Paul's first epistle to the Thessalonians advises church members there to greet each other "with a holy kiss." But I'm not at all sure that's what's going on here. It feels more like insectual harassment. Besides, I don't know why the team needs me. The Royals already have someone with my job description -- Kendrys More-rallies.

RM II: What is it with you humans and your insistence on categorizing and labeling? You are asking things you don't need to know.

Me: Sorry. I just know lots of Royals' fans are interested.

RM II: If they really cared, they'd try to liberate me by debugging the dugout.

Me: So who's your favorite Royal?

RM II: At first I thought it would be Salvador Perez. At the end of each winning game I thought I heard him shouting, "Let us pray." But I was wrong. Turns out he was saying, "Let us spray," after which he'd drench someone. Seemed weird. So now I don't like any of the Royals very much.

Me: Do you think the team will make the playoffs? And are you praying for that?

RM II: I don't know if they will, and God doesn't care who makes the playoffs.

Me: Say, what kind of god are you, in fact, praying to?

Me: Was that an example of insect humor?

RM II: You're killing me. Your question is an example of committing pesticide.

Me: Well, thanks for your time. I know individuals of your type live only about 12 months, so I don't want to monopolize whatever time you have left. Oh, by the way, did you see the Royals win the World Series last year?

Me: May you find the freedom for which you pray. And may your life go to extra innings.

RM II: And, before my time is up, may I find a womantis.

Me: I'll keep that in my prayers.

(By the way, the Royals rallied from a 4-2 deficit Tuesday night to tie it 4-4. But after the rain delay, they lost the game in 10 innings 5-4. But for the 2015 World Series champs, I consider that loss just a reign delay.)

The Vatican is telling Catholic clergy that their sermons should not exceed 8 minutes. Oh, my. That flies in the face of an old Protestant saying, "Sermonettes make Christianettes." The only time we Presbyterians ever get 8-minute sermons is when the preacher loses his or her voice one-third of the way through.