The Bible outsells all other books -- in print, in digital form, any way you want to measure it. 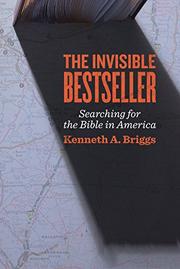 But is anyone in America reading it? Studying it? Using it to guide their lives?

Those are among the fascinating questions that journalist Kenneth A. Briggs delves into in The Invisible Bestseller: Searching for the Bible in America. It's a revealing, well-researched book that Christian and Jewish (and Muslim, given that Muslims are supposed to know Bible stories that are sometimes referred to just briefly in the Qur'an) Bible owners would do well to digest.

"Bibles keep piling up in homes and on smart phones and iPads at phenomenal rates," Briggs writes, "so the desire to own them hasn't notably subsided, but collectively we don't feel much need to read them or consider their prescriptions more binding than those from the multitude of other self-help sources. Americans still want to be friends with the Bible, honor its background, teach things about it, and even put it on a modest pedestal -- but they don't want to partner up with it."

Briggs is not arguing in favor of any kind of literalistic, inerrant view of scripture. He notes, in fact, that such a view is held by fewer and fewer Americans in an age that sometimes makes an idol of science as opposed to making the Bible itself an idol, which is what the literalists do. Indeed, as Briggs notes, "Americans are much less familiar with what is actually in" the Bible than they used to be. One of the results is that "the Bible's blessings are still widely bestowed, covertly at least, on the country's wars, legislatures and ever-escalating material hungers. . .For more and more Americans, the Bible has become a museum exhibit."

That's an intriguing observation in light of the fact that right now the large national Museum of the Bible is under construction in Washington, D.C., with an opening planned for next year.

Does it matter, Briggs wants to know, that Americans seem to have retired the Bible to the archives? Well, that depends, he concludes: "For a great deal of our history, after all, we as a society sanctioned slavery, practice racial discrimination, tolerated child labor, annihilated Native Americans, treat women as second-class citizens and barred them from voting, and criminalized homosexuality. If that was an ethical golden age, perhaps we may do no better, but we could hardly do worse."

How widespread is Bible ownership among Americans? Briggs reports that in 2014, 88 percent of American homes had at least one copy and that 79 percent of Americans regard it as a sacred book. Today there are, he says, more than 80,000 versions in more than 500 languages around the world, and U.S. sales are annually in the 25 million range. And although the number of Christian bookstores has fallen dramatically in recent years, people are buying Bibles online and are downloading digital versions (like the YouVersion, which I use) like crazy.

And yet biblical and theological illiteracy is rampant among Americans. That's especially true of younger citizens who haven't grown up with the book somehow near the center of their lives.

"The Bible," Briggs concludes after traveling the country to see how and where the Bible is used, "is extolled and sanctified, but more like a grandparent with whom family members seldom actually interact but who exists as a symbol of vaguely familiar wisdom and truth."

There are forces at work to get more Americans better connected to the Bible -- forces beyond local congregations.

For instance, the American Bible Society, as Briggs reports, "says it has overemphasized distribution and will now shine a national spotlight on why so many people are not cracking the Bible open -- and how they could be induced to do so."

But as America becomes a nation with a greater percentage than ever of religiously unaffiliated people -- and a nation that can't seem to agree on the need to teach public school students about the Bible and its influence (yes, there are constitutional ways to do that) -- it seems a daunting task to get Americans more engaged with scripture. Briggs says that "the chances that weak readers will dive into an app seem like a lot shot."

There's much more in this book, including a good account of the tension between the American Academy of Religion and the Society of Biblical Literature and a review of the controversial work of the Jesus Seminar. But, in the end, this is a helpful accounting of the place of the Bible today in American society. It still has lots of influence, but biblical scholarship done at seminaries and on college campuses doesn't regularly find its way to people in the pews. Which means that lots of people who always have understood the book to be a basic moral guide continue to miss the fascinating stories the Bible offers in the way of history, mythology, social customs, change in word usage and so much more.

Too bad. The Bible is a library full of windows that show us not just an ancient world but also what we are and what we could be.

A woman in Houston has reported a money-grubbing scam from a fake Pastor Joel Osteen. But she figured it out before she turned over any money. You've at least got to admit that the scammer at least knew that prosperity is at the center of what Osteen preaches.