I became acquainted with Hinduism when I lived in India for two years of my boyhood (ages 11 to 13). And I've discovered that lots of people in the U.S. think Hinduism, the third most populous religion in the world, is pretty much confined to India, save for a few folks who moved to the U.S. and elsewhere from India and brought their Hinduism with them. 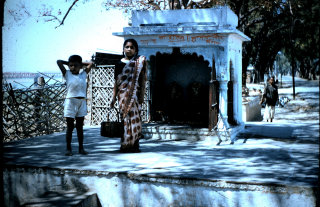 Well, there's no breaking news about Hinduism today, but I wanted to pass along this piece (it's interesting, though not well edited) that I ran across the other day that lists the top 11 countries in which Hindus can be found.

Yes, India is ground zero for Hinduism. Some 95 percent of the world's Hindus live in India. The article to which I've linked you says the world Hindu population is about 1 billion. That's higher than I usually see. More often the number is between 850 million and 900 million.

The other countries (or areas) with Hindus in order of numbers? Nepal, Bangladesh, Indonesia, the West Indies, Sri Lanka, the Philippines, Malaysia, the United States, South Africa, the United Arab Emirates.

Beyond those nations, you'll even find Hindus in Canada. There are, in fact, dozens of Hindu temples in Toronto, one of my favorite cities in the world.

There are lots of theories about how the term Hindu came to be applied to followers of the religion, including the notion that the British colonial rulers of the country started using the term to refer to such folks, whereas before it was a broader geographic or ethnic term.

At any rate, Hindus are in lots of places today, including Kansas City, where the Hindu Temple and Cultural Center of Kansas City is in suburban Shawnee, Kan.

And my guess is that if you live in a fairly large city anywhere in the U.S., you will find Hindus living within a few miles of you.

By the way, Hinduism often is referred to as a polytheistic faith, and that's because it postulates many names and forms for God (some say around 300 million). But, in the end, Hinduism, too, is monotheistic in that there is one God to whom all the others point, or whom they represent and reveal.

(The photo here today is one my father took in the mid-1950s in India. It shows a roadside Hindu temple containing several idols, which are difficult to see in this picture. But the kids in front of it are cute. I mention this photo in my new book, due out Sept. 20, The Value of Doubt: Why Unanswered Questions, Not Unquestioned Answers, Build Faith. I'll be introducing the book the evening of Sept. 28 at the Plaza branch of the Kansas City Library. To make reservations to this free event, click here.)

SHE CALLS THEM CHRISTIAN MODELS

Well, here's a switch. Sally Vance-Trembath, author of this column, teaches religion at Santa Clara University and she has some words not of critique but of actual praise for two women prominent in, well, politics -- Michelle Obama and Hillary Clinton -- not because of their political stances but because, she writes, they live out authentic Christian lives.

P.S.: The first of my monthly columns for Flatland, KCPT-TV's digital magazine, is now online here. It has to do with revelation.