One of the problems of being considered a religious leader is that whatever you do or say reflects good or ill or indifference on your faith community. 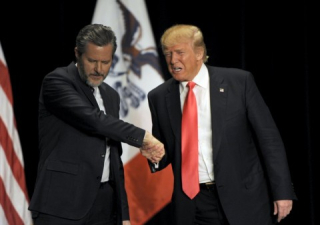 Traditional Muslims struggle with this all the time when self-appointed radical extremists pretend to speak for all of Islam. But it happens in other traditions, too. Think, for instance, of how often such televangelists as Pat Robertson and the late Jerry Falwell said ridiculous things that many outside of Christianity understandably but wrongly imagined was reflective of all of Christianity.

Now the person who is embarrassing other Christians is Fallwell's son, the Rev. Jerry Fallwell Jr., who seems to have tossed aside Christian values to be a big public backer of Donald Trump. (Both are seen in the photo at left. I'll leave it to you to figure out who is who.)

Even media outlets that normally might be in harmony with Falwell on some issues and certainly with mainstream Republicans are having a hard time stomaching what they're seeing.

For instance, The National Review just published this essay, the author of which has a hard time finding anything at all good to say about either Fallwell or Trump. He writes:

"Falwell has fallen under the dark spell of Donald Trump. That is not a crime, but it is having a corrosive effect on his intellectual and moral judgment. He is saying witless and defamatory things. For those of us of the Christian faith, the fact that Falwell is viewed by many as an Evangelical leader makes it that much worse. We have been pained by the harm that a previous generation did to Christian public witness because of partisan, reckless, and graceless comments. Now we have this.

"When a leader of a major Christian institution speaks out on public affairs as Falwell has, he is speaking not just for himself. He is making a broader statement about faith and politics – and, in this case, is shaping how people view Christians and Christianity."

It pains a lot of Mainline Protestants like me to discover that some people imagine that Falwell or James Dobson or Joel Osteen (one of the Prosperity Gospel preachers) somehow is offering thoughts in harmony with ours. No. Christianity operates under a broad umbrella under which, ideally, adherents might be able to find a fair amount of common ground. But sometimes that ground is barely big enough for just two people to occupy at the same time.

The list of religions in the world continues to grow even as quite a few people are walking away from religion. The most recent one I've heard about is called The Aetherius Society and was started in the 1950s by a guy named George King. It's about UFOs and Buddha and Jesus being from Venus. And such like that. Here is a story describing the group. The human imagination seems almost limitless.

P.S.: The first of my monthly columns for Flatland, KCPT-TV's digital magazine, is now online here. It has to do with revelation.