I just finished reading a terrific biography of the late columnist Mary McGrory, whom I met in 2000 when the National Society of Newspaper Columnists gave her our Lifetime Achievement Award. 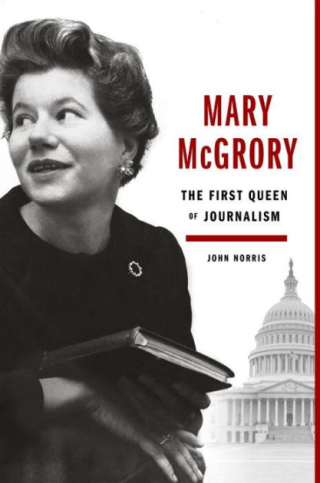 Reading the book let me relive many of the major political events that have occurred in my life, from the Army-McCarthy hearings to JFK's assassination to Watergate to Iran-Contra to the raucous Bill Clinton years to the Supreme Court's decision that declared George W. Bush the winner over Al Gore in 2000.

But it also reminded me that quite a few (not all) of my columnist colleagues around the country over the years have been people of faith who have sought to live out their faith in various ways.

Mary McGrory was just such a person. From early in her career at the now-defunct Washington Star to her later career at the Washington Post, this Irish-Catholic (and half German) woman was a regular volunteer at an orphanage in suburban Washington, St. Ann's Infant and Maternity Home, now known as St. Ann's Center for Children, Youth and Families.

Mary was almost relentless as a volunteer there.

This is how author John Norris describes the start of that work in his new book, Mary McGrory: The First Queen of Journalism:

"Although Mary fit in with reporters, her Catholicism set her slightly apart from the rest of the breed. She didn't like it when reporters gambled, and she took the Church's dim view of things like premarital sex seriously. She also had an abiding belief in the importance of doing good works. Not long after settling in Washington, Mary visited the St. Ann's Infant and Maternity Home, a short walk away from where she was living, by Dupont Circle. St. Ann's was a refuge for unwed mothers and their children, and its clientele was mostly young Catholic girls who had gotten into trouble.

"Mary introduced herself to the sisters who ran St. Ann's. Chatting over tea, she opined that many of the single women she met in Washington were alarmingly self-absorbed, and she wanted to volunteer at the orphanage. The sisters, never having had a volunteer, weren't sure what to make of this insistent young woman. As they tried to diplomatically say 'No, thank you,' one of the orphans wandered in from the playground and clambered into Mary's lap. With upturned eyes, he asked Mary if she was going to stay the night. St. Ann's had its first volunteer."

She was a volunteer there on a regular basis almost to her death in 2004. But she didn't do it alone. Which is to say that she talked some of the politicians, including presidents, she covered into helping out there, too. It was hard to say no to Mary McGrory.

For much of the time that Mary was an active journalist until today many newsrooms have had a reputation as being filled by people without much connection to religion. That reputation is only partly deserved. In my nearly 36-plus years of full-time work at The Kansas City Star, I knew many people who were quite committed to their faith traditions, along with some agnostics, atheists and others who had so little connection to faith that they hardly knew how to classify themselves.

But McGrory's active Catholic life, while perhaps a bit unusual for journalists of her time, was not unique. And this new biography may help other journalists with active faith lives realize they aren't alone.

THE CONCENTRATED USE OF CAPITAL PUNISHMENT

The death penalty, which has been used less and less in recent years in the U.S., continues to shame every state that uses it. But where is it most often in play? This New York Times Magazine piece describes the reality that just a handful of counties across the country account for a disproportionate number of capital punishment cases. Which means, of course, that the death penalty is not used evenly or fairly everywhere -- one more reason that people of faith should be working hard to abolish it.