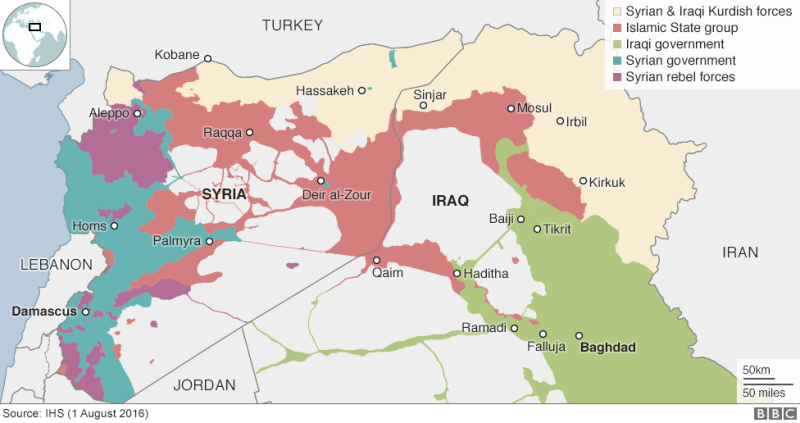 But where did this ISIS come from? How was it formed? There's a lot about that we don't know (though we do know that no matter what Donald Trump says, neither Hillary Clinton nor Barack Obama is the "founder" of ISIS; neither is Trump the founder, as Sen. Claire McCaskill, hitting back at Trump, has alleged -- see "Related Articles" below).

ForeignPolicy.com has published this three-part series about how ISIS got created. It is based on extensive interviews with a member of ISIS who has some disagreements with how the organization operates but who still is attached to the terrorist group. The story tells about the many hours and hours of interviewing the two journalists who wrote the series did with this man and some of the ways in which they sought to verify his information.

In these sorts of cases, of course, it is wise to be at least a little skeptical about whether a terrorist is being fully truthful and about what he might really know and why he wants to tell journalists what he knows.

That said, so far this seems to be one of the few accounts of the creation of ISIS that seems credible.

As you read the series, keep in mind that the goal of ISIS is to create a caliphate, or Muslim-run nation, and spread to the entire world the group's sickening, twisted version of Islam by any means necessary, including, as part two of the series reveals, chemical weapons.

The series makes me wonder how much of the information it contains already was known and verified by our government and its allies and how much was news to those conducting anti-terrorist efforts. I hope most was known and that our intelligence services are on top of their job. But I just don't know.

(The August 2016 map shown here today can be found here and is from the BBC.)

THE CENTER OF RELIGIOUS ACTION

Pope Francis has called the church to be a field hospital for a wounded world. But as this priest notes, if that doesn't happen at the parish level, it's probably not going to happen at all. Despite being a hierarchical organization, the Catholic Church's primary center of activity is the parish, and it's parishes that must organize to help the needy and spread the good news. It turns out the same thing is true for other faith traditions. Just as all politics is local, so all religion is local, too, in a sense.