Home Archives Profile
Lutherans and Catholics move closer together: 8-19-16
How ISIS was founded: 8-22-16

Ever since the 9/11 terrorist attacks, a lot of the focus on violent Islamists has been in Europe, especially in such countries as Britain, France and Germany. And for good reason. 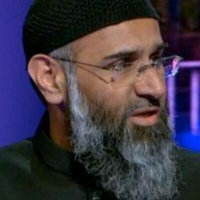 of the theological and philosophical support for terrorist activities has come from extremist clerics in those countries, as they have preached in mosques and used social media to spread their hatred.

Which is why it's good to learn of the recent conviction of a man Reuters news service labels "Britain’s most high-profile Islamist preacher," Anjem Choudary (pictured here).

The Reuters story says Choudary, 49, "has been found guilty of inviting support for the group known as the Islamic State."

Choudary is exactly the kind of extremist who has given Islam a bad name, not just in England but around the world, including in the United States. He's also an example of the radicals who must be stopped by every legal means available and who must be denounced by traditional Muslims and others who are working hard to let the world know that Choudary and his ilk are not preaching Islam but a putrefied, distorted version of religion.

Reuters quoted Dean Haydon, head of London police’s Counter Terrorism Command, this way: “These men have stayed just within the law for many years, but there is no one within the counter terrorism world that has any doubts of the influence that they have had, the hate they have spread and the people that they have encouraged to join terrorist organisations.”

Because the U.S. enjoys a long and cherished tradition of free speech, it may be harder here than in some other countries -- where the laws may be a bit different -- to find and convict any radical clerics who would like nothing better than to hunt up recruits for ISIS, al-Qaida or other terrorist networks. But wherever such anti-civilization voices are heard, law enforcement authorities, aided by citizens who are aware of such messages, should be doing everything in their power to shut them down.

The British have done the world a favor by convicting Choudary. Until he has a message of repentance and hope to offer, may he be silent.

(Here, by the way, is the BBC's account of how officials finally shut Choudary down.)

ZINGERS FROM THE BACK PEWS

Just discovered a guy on Twitter called the "Church Curmudgeon." Here's a story about him, along with some of his funny, satirical tweets. Further proof that grumpy old men can be a hoot.

P.S.: Please mark your calendar and tell friends: I will introduce my newest book, The Value of Doubt: Why Unanswered Questions, Not Unquestioned Answers, Build Faith, at 6:30 p.m. on Wednesday, Sept. 28, at the Plaza branch of the Kansas City Public Library. Hope to see you there. For details and to register, click here.