Several years ago, I wrote this article about the highly charged controversy involving a snippet of what appeared to be ancient papyrus in which this partial line was found: "Jesus said to them, 'My wife. . .'" 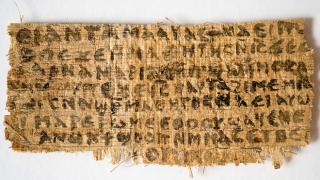 The item in question (pictured here) had been revealed to the world in 2012 by a Harvard historian, Karin King. And there has been a lot of commentary -- pro and con -- about its authenticity since then.

That's what you would expect about a document that raised the possibility that Jesus of Nazareth was, in fact, married. In fact, something like that theory shows up in a book about Mary Magdalene that I recently reviewed here on the blog. And, of course, the idea of Jesus being married to Mary Magdalene is at the center of author Dan Brown's popular novel (a novel means it's fiction, folks), The Da Vinci Code.

Well, today I want to be brief here so you will have time to read and ponder journalist Ariel Sabar's fascinating Atlantic piece about all of this.

Sabar has done lots of leg work, traveling hither and yon to find the story and the people behind the papyrus piece that King put in public play four years ago.

If nothing else, it will give you an excellent sense of what a good reporter does.

On the basis of Sabar's piece, King now says she believes the papyrus piece about Jesus' wife probably is a forgery.

LOS ANGELES -- While I'm here this weekend for the annual conference of the National Society of Newspaper Columnists I won't be adding the usual second item to the blog. But you can check in on the NSNC site to see something else good journalists do -- try to get better.