The resurrection of Westport Presbyterian Church: 5-14/15-16 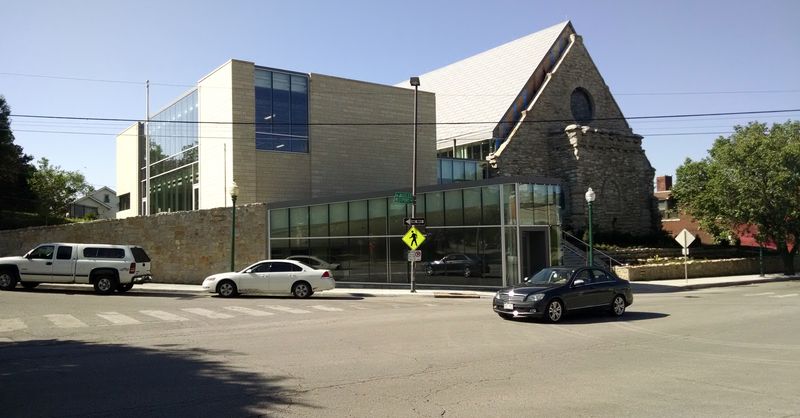 For the first time since fire bullied its way through Westport Presbyterian Church in Midtown Kansas City in December 2011, the congregation worshiped in the still-under-construction sanctuary at the site of the fire on Sunday, April 24. 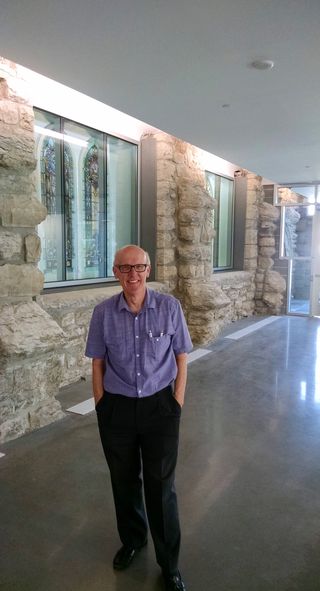 "It was the best Sunday in my ministry," the Rev. Scott Myers (pictured here at left), pastor of the old church, told me the other day as he and I walked through the church. It has undergone a multi-million-dollar reconstruction, largely through insurance, both the church's and that of a contractor whose employee was determined to be at fault in starting the fire. 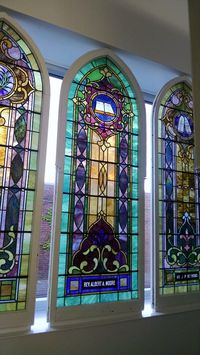 It's been a grueling trip from fire to reuse of the 100-plus-year-old church, but today Scott can laugh and smile and say things like "Your lawyer is your only friend."

There have been, after all, "about a zillion struggles with this," says Scott, who has been pastor there since 1994.

But now much of the old limestone building has been resurrected and even parts of the burned and deconstructed educational and community building attached to the church have been reused in the redone structure.

Considerable work remains before all the space is available for use, but it's getting there. And the sanctuary is beautiful, with rescued stained-glass windows (pictured at right) shining brighter than ever now that they've come out from behind some faded plexiglass covering that was on them in the old sanctuary.

"I wonder," Scott says, "if this is what they looked like when they were installed in 1904, because I can tell you they are far more beautiful than they ever were in the time I've been here."

Yet to be installed is a pipe organ, but installation of that should begin in a few weeks. 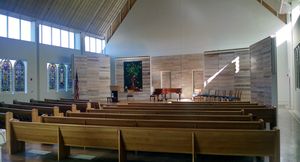 Even though the crew from A.L. Huber, the general contractor, still is there under the supervision of Butch Schasteen, the not-quite-ready space already is being used by outside groups, with more to come. Boy Scout Troop 60 is back, as is the Children's Peace Quest, two Alcoholics Anonymous groups and the Westport Center for the Arts.

When the fire occurred, average Sunday worship attendance was small -- about 50 or so. The church has held to approximately that number while it's had to meet at a nearby event space on Sundays, but Scott already is noticing new faces showing up: "I have absolutely no doubt that this place is already growing just in three weeks. I mean, it's a beautiful experience to be in here. If you lived in Westport or this whole area and you were thinking about following Jesus somewhere, wouldn't you want to be in here? To me it's a state of perpetual wonder that it even exists."

"It brings this church to the street," Scott says. "That's something we're proud of."

The entrance to the part of the building that holds the church sanctuary, Scott says, used to be a weekend evening gathering place for drunks. But one recent Friday evening, he said, he looked out on the new steps and found a young couple having an impromptu picnic. That's the kind of change he expects more of: "That's a symbol of the transformation."

Westport decided to create a structure that would preserve its vital and historic past but also represent the future. So much of the old stonework has been incorporated into the modern, energy-efficient new space. (In the bottom photo you see the building's new energy system in the lower level.)

"It's a bright spot again in the community," says Huber's site superintendent Schasteen.

Scott says that after the fire Schasteen "helped me to heal."

"He was so sad," Schasteen told me. "When I first started, I told him one day, 'Rev. Scott, this is a great thing. This is God's way of telling you it's time to upgrade. We're going to make this great.' He finally came along."

The Westport congregation has been, at least figuratively, through hell and back, complete with fire. Where it will be in five or 10 years depends on the continued commitment of its members and on the willingness of the surrounding community to re-engage in this welcoming site.

(While doing a piece about the United Methodist Church of the Resurrection's new sanctuary the other day, KCUR-FM also reported about Westport Presbyterian here. Have a look and a listen.) 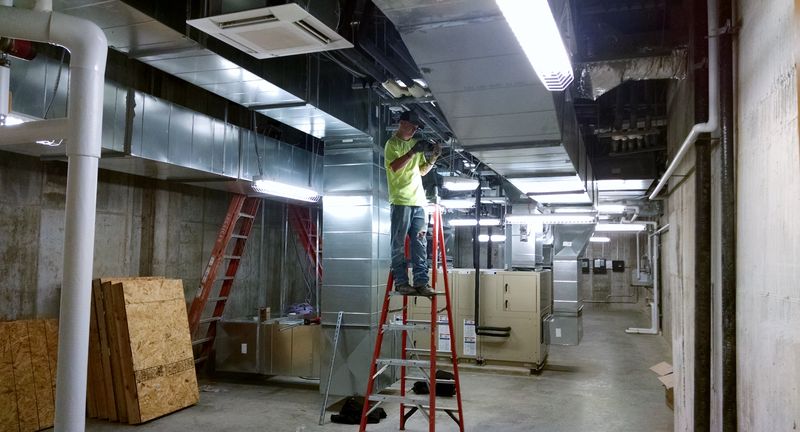 WHO CARES IF IT'S THE SABBATH?

A new survey shows that fewer and fewer Americans pay much attention to any kind of Sabbath. If you're reading this on what your faith tradition considers the Sabbath, thanks for being part of the problem. I think.