Home Archives Profile
Who teaches you theology? 5-12-16
The resurrection of Westport Presbyterian Church: 5-14/15-16

As some of you know, I collect different translations of the Bible. Well, at least those that take the original Hebrew and Greek (with a bit of Aramaic) and translate the words into English. 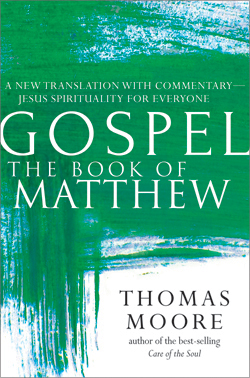 Newer translations often are able to use older, more recently found manuscripts -- and, thus, are more likely to be more faithful to the intentions of the original writers. But mostly I just enjoy comparing the various ways translators can render the original languages into a variety of English versions. By comparing them, I get a richer sense of meaning.

So I'm usually intrigued to discover yet another effort to give the world a new translation of at least part of the Bible. Thus, let me introduce you to Gospel: The Book of Matthew, a new translation with commentary by Thomas Moore, a psychotherapist and former monk.

It's an engaging work, made more so by the various ways in which the translation choices surprised and at times even bothered me. But here's a pretty good rule: If a new translation of the Bible doesn't in some way challenge your thinking, it's probably not worth the effort.

One of Moore's translation choices that I found challenging and, at first, off-putting, was to use "Sky Father" for God. I thought it played into the annoying practice of some of the more aggressive atheists these days to dismiss God as an imaginary "Sky Daddy," as they sometimes write.

But Moore says he prefers "to use the word 'sky' instead of 'heaven' because it is a concrete image. I do not mean a literal father in the clouds but rather the sky as an image for spirit. . .Our usual anthropomorphic -- human-like -- language is only an approximation of the sublime mystery of this father."

Still, most readers, I'm guessing, will find it strange, if not difficult, to begin Matthew's version of the Lord's Prayer in chapter 6 the way Moore translates it: "Our father in the sky. . ."

Moore notes that Matthew's portrayal of Jesus is "artful, layered and intelligent," but, he says, "you have to think in layers and metaphors and cannot be simplistic when you read him." Exactly right.

Other than an occasional odd translation choice, most readers familiar with Matthew will easily recognize Moore's translation. What Moore brings to the effort that is different is his commentary, done in the form of footnotes that appear one page to the left of the text. It seems an odd way to offer footnotes, but if my experience is typical, the reader pretty quickly gets used to it and eventually finds that having the footnotes directly across from the text instead of below it is an advantage.

Moore's introduction and many of his comments reveal him to be in fairly deep harmony with scholars in the Jesus Seminar, who in recent decades have cast doubts on the authenticity of many, if not most, of the words attributed to Jesus in the four gospels. An example is found late in the book in the Matthew 28 story of the resurrection. In a footnote, Moore quotes Donald Spoto's book, The Hidden Jesus: A New Life, as saying that "When we say Jesus has risen from the dead, we do not mean that his corpse was resuscitated and that he came back to the same kind of life as we know it; that, after all, would be only a return to impermanence and an orientation to death. . .Jesus has entered into a new and permanent manner of existence -- immortal, deathless, no longer limited by our categories of space and time."

All fairly standard modern thinking about the resurrection. Then Moore expands that thinking by adding this: "We are all resurrected when we 'get up' from the darkness and stupor of our unconsciousness and acting-out. We live an entirely new kind of existence." Which, while not disputing the resurrection of Jesus, tends to diminish the eternal nature of resurrection that many people have in mind when they refer to the term.

And yet earlier, in a footnote in Matthew 22, Moore foreshadows this kind of thought when Jesus describes God as "not the God of the dead, but of the living." Moore's note on that verse says this: "This key point could change the lives of many people who see religion mainly has having to do with the afterlife. Jesus speaks for a God of the living."

No argument from me there.

Pope Francis is asking the church to study the possibility of ordaining women as deacons. Many would view this as a step forward -- into the early 20th Century.