Home Archives Profile Subscribe
Why are good Samaritans so rare? 4-20-16
A move to redeem a Hitler history site: 4-22-16

This past Monday afternoon, I went to the United Methodist Church of the Resurrection (COR) in Leawood, Kan., to pick up T-shirts for my wife and me to wear that evening in the GiveSevenDays walk. 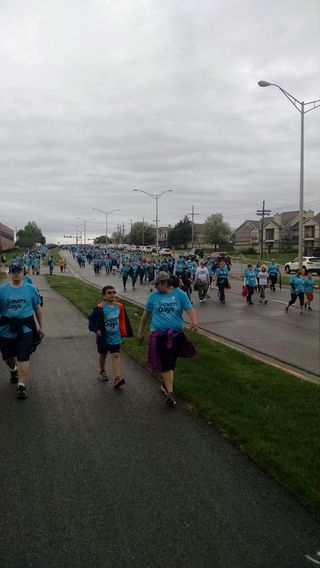 There was Mindy Corporon (pictured at right), the primary driver behind this community effort to stand against the hate and evil that drove the racist neo-Nazi who murdered her son and father plus another person on Palm Sunday 2014 at two area Jewish facilities.

It was the last of this year's Seven Days events and I asked Mindy if she was holding up pretty well. She said she'd had a York peppermint patty to start her day and was ready to see this week-long commemoration of love through to the end that night.

As Marcia and I walked that evening from the Jewish Community Center to COR, we happened to join up with some friends -- a mother and her daughter. I said to the mother how impressed I was with the response Mindy has made to the disaster that struck her family and how she has garnered the support of much of Kansas City.

"She's just amazing," our friend said. "In fact, she's like from another planet."

Well, Mindy and the family of Terri LaManno along with many good civic citizens of our area have shown not just Kansas Citians but also the world how best to respond to evil. 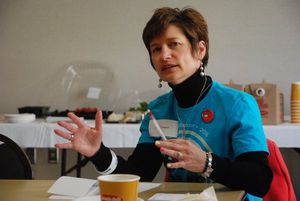 As I wrote about Mindy in this recent National Catholic Reporter column:

The Christian response (to evil and suffering) can be this: I don't know why evil and suffering exist, but I will represent Christ to those who are suffering. I will mediate the grace of God to those in pain. I will be a channel of God's love to those for whom life has turned dark and hopeless.

Mindy Corporon has chosen to respond in exactly that way generous, loving way even though she and her family are among those grieving because of the Palm Sunday murders of her son, father and another woman (all Christians, though the shooter said he was trying to kill Jews).

Among the hundreds of people walking Monday evening in solidarity with the Corporon and LaManno families I saw quite a few friends and religious leaders, including the Rev. Adam Hamilton, Mindy's pastor at COR, and Rabbi Arthur Nemitoff, who leads Congregation B'nai Jehudah, which the walkers passed on Nall Avenue.

But beyond such leaders there were just lots of everyday Kansas Citians, white and black, young and old, Asian and Latino, male and female (though as this editorial in The Kansas City Star correctly noted, this effort needs more such diversity).

Their message is Mindy's message: Love will win out over hatred and bigotry. That is a constant struggle, of course. So the message must continue to be proclaimed in new ways as the years go on.

But Kansas Citians can be proud of the way they have publicly shown their revulsion for the antisemitic nonsense that gave the shooter purpose that dark day.

What should interfaith dialogue and cooperation look like? Well, there's a great current example of it in Lansing, Mich., where a mosque has made a temporary home for a Unitarian Universalist congregation waiting for construction of its own building. No rent. No requirements. Just welcome. Note the UU congregation's good response. Now go and do likewise.