Several truths about the demographics of Christianity in the United States are both true and obvious.

* The percentage of people identifying themselves as Christians is shrinking. Recent surveys show it's now down to about 70 percent of the population.

* Not long ago, Protestants were a large majority of the population. Today that group has slipped to below 50 percent of the population, while the number of people who define themselves as religiously unaffiliated has risen to about 23 percent.

* And Mainline Protestant churches (such as United Methodists, Presbyterians and Lutherans) have been hit especially hard by the shrinkage in recent decades.

It therefore might be easy to assume that Mainline Protestant churches everywhere are having trouble attracting new members, especially by way of traditional confirmation classes, which is the route by which 13-, 14- and 15-year-olds often come into church membership.

But if you assume that, you will have to explain how it was that the United Methodist Church of the Resurrection in suburban Kansas City this past Sunday afternoon confirmed 284 teen-agers (some of whom are seen in the top photo). The Rev. Adam Hamilton, founder and senior pastor of the 20,000-member congregation, said it was the largest confirmation class in the history of Methodism in the U.S. 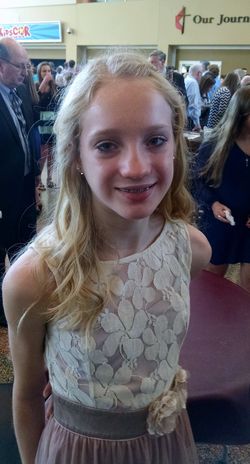 And it included my granddaughter, Olivia (pictured here).

The confirmands, as they're called, had been in special study groups for 18 weeks to prepare for this moment. It's the time when they make a public confession of Christian faith and, in effect, become adult, voting members of their congregation.

"This," Hamilton told them, "is the single most important decision you will ever make."

Are 13- and 14-year-olds ready to make such a decision? Well, of course, it depends not only on the maturity and discernment of each individual but also on each individual's willingness to confess that there still is much to learn and that his or her understanding of God and of the life of faith will change (grow, one hopes) over time.

If these 284 young people are anything like my own Presbyterian confirmation class back in 1958, some will fall away from the faith (especially when they discover how difficult a faith Christianity is, calling us, as it does, to act against our deep but hateful instincts by trying to love our enemies), some will remain but be not especially active and some will be devoted disciples of Jesus Christ in ways that sometimes will take your breath away.

I liked Hamilton's brief, three-part description to the confirmands of what is involved in being a Christian:

* It means letting God love you, even when you sometimes don't feel very lovable.

* It means reciprocating that love, or loving God back.

* And it means living out your faith by doing what you can to mediate God's grace to a wounded world.

There are, of course, many other ways to describe what the life of faith -- any faith -- is about, but those three seemed to me to capture the essence.

And as Hamilton told the confirmands after they had been confirmed, "At this moment you were set apart for God's work for the rest of your life."

So, yes, the American religious landscape is changing, and part of that change means a lower percentage of the population identifies as Christian. But the story has both ups  and downs and is not a simple, straight-line tale.

And those 284 young people on Sunday experienced something that, whatever their religious future, I hope they always remember, which is that thoughtful, careful ritual is vital for marking milestones along the way of life.

'SPOTLIGHT' IN THE SPOTLIGHT (AND KC, TOO)

I was glad to see the movie "Spotlight" win an Oscar as best film of the year. Not long ago I did this column for Flatland, KCPT-TV's digital magazine, about a Kansas City aspect of the Catholic priest abuse scandal. If you missed it then, I invite you to give it a read now that "Spotlight" has won.