Pope Francis has a new book out that I haven't read, though I've read some about it. 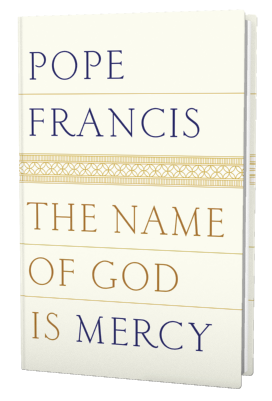 It's called The Name of God is Mercy, and no doubt was timed to fit well with the pontiff's declaration of this as a Jubilee Year of Mercy. But in this Patheos.com blog about the book, the Polish-born author, Artur Rosman, talks about the power of story, the power of anecdote to make a point.

It's a point that cannot be made too often. In fact, I spoke this past Sunday at a church about writing a spiritual will, and one of the points I made is that whoever receives such a document will grasp its meaning more quickly and remember it longer if it contains stories about the values by which you tried to live your life instead of simply containing a list of those values.

Don't just say that you valued honesty, I told them. Instead, tell them a story about some choice you had to make at some point in life that taught you to value honesty.

As Rosman writes, ". . .an anecdote, an existentially significant chunk of someone’s life, reads big. Pope Francis’s anecdotes come from sources as varied as his own life, the lives and writings of other popes, lives of the saints, his own parishioners (both the ignorant rich and the wise poor), and the accounts of confessors."

This is why Jesus told parables, those richly layered stories that mean one thing to one person and something else to another. The problem with those parables today, as I wrote recently here, is that we've domesticated them to the point that they rarely have the ability to shock and discomfort us in the way the First Century Jews who heard them would have been shocked and discomforted.

Still, it's stories that burrow their way into our brains and can be called up with much more ease than a list of rules or commandments.

The other night, for instance, we had a baseball-themed dinner at our house. When my friend Denny Matthews, the voice of the Kansas City Royals (current world champs, in case you hadn't heard), wanted to make a point about how inadvertently funny Yogi Berra could be, he didn't just say, "Yogi could be a funny guy without even meaning to be." Rather, Denny told our guests a great story about Yogi talking about an old Steve McQueen movie. I won't retell that here except to note the punchline, which was Yogi saying this: "Yeah, I think he made that movie before he died."

Religions live and die by stories. As I will make clear in a book I have coming out later this year, we live by metaphor, by allegory, by myth because we have no choice. We tell stories because they help us grasp at least some small aspect of an infinite God. The best preachers know that.

A HUGE ARCHIVE OF BLACK SERMONS

In sermons delivered in predominantly African-American churches, you will find preachers using lots of stories to make their points. Now a black pastor has put together a website called Roho to collect black sermons and offer a forum for discussion. This New York Times story will tell you about it.