President Obama's first-ever visit to a mosque in the U.S. this past Wednesday was long overdue. 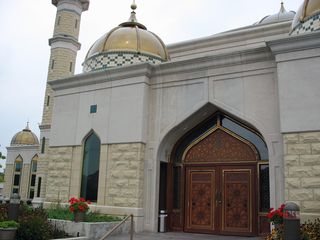 And although it was important for many reasons (including a political reason, given that Obama used it, among other things, to excoriate Donald Trump for his xenophobia without naming Trump), it was especially important for a reason that most of us non-Muslims would have missed, had not some Muslims pointed it out to us.

For instance, Haroon Moghul, a fellow at the Institute for Social Policy and Understanding, wrote this piece for CNN in which he argued that it's by having important guests that mosques will more readily shape up and begin to treat all their members more equitably and hospitably.

In that piece, Moghul writes this:

Too many mosques are still cults of personality, dominated by one person or at most a handful. There's little turnover on many boards, not much outreach to the wider community, underinvestment in education and overemphasis on a religious discourse that alienates instead of empowers. I still come across mosques that relegate women to parts of the building that are clearly afterthoughts, if not incipient human rights violations.

Half the congregation is consigned to basements, walled-off rooms with no access to speakers or preachers, or relegated to distant and dark upstairs corners. I am afraid, though, that some of us might get used to this kind of discrimination, and become resigned to it. Until and unless, of course, you have a guest. Maybe an important guest. Maybe the most powerful person in the world.

The fact of engaging with the wider world might help give many Muslim communities the push they need to make changes that are long overdue.

So perhaps if Obama and other dignitaries were to visit mosques more frequently, those who run them would begin to make them more inviting even for Muslims, including those Muslims who, like Moghul, don't feel especially welcome there now and who have issues with how they're run.

I've been to quite a few mosques in the U.S. and always have been welcomed graciously, though in a few of them it's been obvious that they're unused to seeing non-Muslims visit. A culture of hospitality can be good not just for the visitors but also for members, it turns out. And such visitors can help American Muslims more easily negotiate their place in the American religious landscape.

By the way, here is the text of Obama's remarks at the Islamic Center of Baltimore.

(The mosque you see in the photo above is the Islamic Center of America in Dearborn, Mich., which I visited a few years ago.)

Speaking of issues in the Islamic world, Muslim leaders from various Western countries have created a new coalition to tackle such issues as Islamophobia. It's always frustrating to have to create ways to work against what shouldn't exist in the first place.

P.S.: I hope you can join me the week of July 10 at Ghost Ranch in northern New Mexico for a class called "Conversations with Jesus and Pope Francis," based on my latest book, co-authored with the Rev. Dr. Paul T. Rock, Jesus, Pope Francis and a Protestant Walk into a Bar: Lessons for the Christian Church. All the details you need to learn more and sign up are here. Still got questions? E-mail me at wtammeus@gmail.com.