Home Archives Profile
Learning the lessons of religion in politics: 2-4-16
Updating the hospitality of mosques: 2-6/7-16

Great snakes and garters. It's been way too long here since we took a humor break. 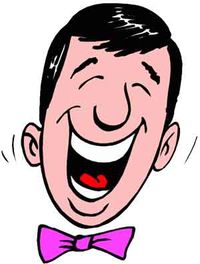 So today you get a few religious jokes from various non-original sources. You're welcome to dream up funnier ones than these and send them to me, though, in the end, I'll be the judge of how funny I think they are.

* A Hindu devotee asked God, represented by the multi-armed Lord Narayana, this question. "My dear Lord," he said. "I understand that you have innumerable inconceivable potencies. But out of all of them the energy of light seems to be the most amazing. Light pervades the spiritual world, it illuminates the material universes and life is impossible without it." He continued, "I would like to know how you make it work."

* Some tourists were watching the re-enactment of an ancient Egyptian religious ritual. One tourist turned to a nearby local, pointed to the statue that was being praised and asked, "Pardon me, but what was the name of that god supposed to be?"

"Why do you ask?" the man replied.

* Six-year-old Angie and her four-year-old brother Joel were sitting together in church. Joel giggled, sang and talked out loud. Finally, his big sister had had enough.

"You're not supposed to talk (and especially out loud) in church."

Angie pointed to the back of the church and said, "See those two men standing by the door? They're hushers."

* A bus full of ugly people had a head-on collision with a truck. When they died, God granted all of them one wish. The first person said, "I want to be gorgeous." God snapped his fingers and it happened. The second person said the same thing and God did the same thing. This went on and on throughout the group. God noticed the last man in line was laughing hysterically. By the time God got to the last ten people, the last man was laughing and rolling on the ground. When the man's turn came, he laughed and said, "I wish they were all ugly again."

* Three men are traveling on a ship, when they are accosted by the Devil. The Devil proposes that if each man drops something into the sea and he cannot find it, he will be that man's slave. If the Devil does find it, however, he will eat that man up. The first man drops a pure, clear diamond, and immediately gets eaten. The second drops an expensive watch, trying to impress the Devil, and gets eaten. The third man fills a bottle with water and pours it into the sea yelling, "You think I'm a fool? Try finding that!"

* Finally, here's a link to comedian Ricky Gervais explaining the Bible. You decide if it's funny.

WHO IN HELL CARES?

A new survey shows that most Americans don't think God cares who wins the Super Bowl. See? That's at least one way that I am like God. Now, if the Royals or Cubs were playing in it. . .