Learning the lessons of religion in politics: 2-4-16

The 2016 presidential race, which started the day after the 2012 election, is, by now, far enough along as to be inevitable. One question, however, remains unanswered: Will voters educate themselves not just about the issues and about the policy positions of the candidates but also about the many ways in which religion sways votes and is exploited by candidates? 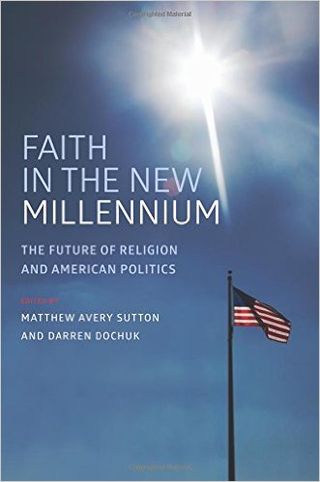 If I said yes to that question I would reveal myself as a cockeyed optimist. And yet here and there one should be able to find voters who want to understand the role religion has played -- and continues to play -- in a country where there can be no religious test for public office.

So if you are such a voter, I give you not only my congratulations but also my suggestion that you pick up a copy of a new book called Faith in the New Millennium: The Future of Religion and American Politics, edited by Matthew Avery Sutton and Darren Dochuk.

This is a collection of 16 essays on politics, policy and religion written by historians whose job it is to pay attention to all this and perhaps even make sense of it.

What makes the book work and, thus, what makes it valuable is that the authors of these essays offer a historical context to their subject. We don't get just quick tweets about the nation's founders, about slavery and religion, about the role of Mormonism, about the rise of the religiously unaffiliated or about what David Koresh, Harold Camping and Billy Graham might have in common theologically -- and what difference it makes. Instead, we get interesting history and analysis.

The book's editors argue that "religion appears to be at a crossroads in its political career and America itself at a point of departure." And yet, they say, religious energy in American politics remains vital and dynamic and "its influence as pervasive today as it was two centuries ago."

Here's a small sample of a few insights from the book:

* ". . .conservative Christians have turned the act of retelling the nation's founding into a religious practice, one that continually reaffirms their vision of the nation's moral purpose and serves as a call to action to rebuild what has been lost."

* ". . .what appears universal in the U.S. context actually constitutes a specifically Protestant form of secularism, referred to here as 'Protestant secularism.'"

* ". . .one segment of the voting population was not wholly supportive of Obama: black conservatives. Some disapproved of Obama's support for abortion, LGBT rights, and -- more recently -- same-sex marriage."

* "In the post-9/11 atmosphere of suspicion, both the denial of Islam's long history in the Americas and the equally long Islamicist tradition of American understandings of Islam and Muslims as inherently violent, tyrannical and misogynistic came together to create new and deeply damaging Islamophobic discourses."

* Finally, I was really pleased to find that in his essay in which he described the 1993 fatal fire at the Branch Davidians' home near Waco, Texas, Sutton came to exactly the same conclusion I did when I went to Waco a year after the fire and wrote a long series of stories for The Kansas City Star about what went wrong there -- stories you can find in my first book, A Gift of Meaning. As Sutton notes, "Almost completely oblivious to Koresh's theology and beliefs, agents from the Bureau of Alcohol, Tobacco, Firearms and Explosives attempted to storm Koresh's Waco compound on February 28, 1993." As I pointed out in my series of articles, had government officials taken even 15 minutes to talk with religious experts from nearby Baylor University, they never would have gone in with guns blazing because they would have understood how such an action would have played right into Koresh's theology.

Well, there is much more here in this book, and voters would do well to absorb its insights about the many ways in which religion plays a role in our politics.

WHAT WE'RE AFRAID OF

A new study says there's been a disturbing rise in the number of American Muslims involved in terrorism, but that the fear many Americans feel about that is far greater than the actual threat. It would make more sense if people had a similar level of fear about what we're doing to the environment. But levels of fear often are simply irrational.