The new faith-based books continue to land on my home office desk with almost alarming regularity, meaning there is no way to keep up with them all. 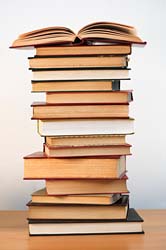 And yet many of them look like volumes that many of you might like to know about. So without offering full reviews of these books I want to introduce you to the ones in my current pile. I will be giving you links to more information about them and a place (often Amazon.com) from which you can purchase them if they interest you. (I give you the Amazon link because that's the easiest way for me to do this, but I continue to encourage you to purchase books from your local independent bookstore.)

As regular readers of this blog know, I frequently write about new books and sometimes devote an entire blog posting to a single book. The last such book, reviewed here, was Biblical Literalism: A Gentile Heresy, by John Shelby Spong.

But today you get relatively brief mentions of several books, and if this list seems to lean toward Catholic subjects more than usual, call it the luck of the draw.

-- Redeeming Conflict: 12 Habits for Christian Leaders, by Ann M. Garrido. In every faith community, there inevitably is conflict. The author, who teaches homiletics at Aquinas Institute of Theology in St. Louis, suggests here that conflict not only need not be destructive but can actually be helpful in guiding the community forward. Each chapter ends with questions for reflection and prayer. It's official publication date is in a couple of weeks but can be preordered now.

-- One Ordinary Sunday: A Meditation on the Mystery of the Mass, by Paula Huston. This is an ode or a love song to the Mass of the Catholic Church. It's a deep dive into the mysteries of the Mass and why it has come to form the author. Non-Catholics can get an insider's view here of what is happening in the Mass and how it is affecting not just individuals but the entire community. It's also due out in a couple of weeks.

-- Jesus Before the Gospels: How the Earliest Christians Remembered, Changed and Invented Their Stories of the Savior, by Bart D. Ehrman. The author, a professor of religious studies at the University of North Carolina, seems to relish writing controversial books about Christianity, as several of his previous books indicate. In this one he raises questions about the connection between historical memory and what we know of Jesus. He pays special attention to the reality that for several decades after the death of Jesus the stories told about him were passed along by word of mouth, rarely in writing. The first gospels did not appear until at least the middle of the First Century. So Ehrman explores the connection between memory and recoverable history.

-- An Other Kingdom: Departing the Consumer Culture, by Peter Block, Walter Brueggemann and John McKnight. This book is a passionate, well-stated argument against what it calls our "consumer kingdom." This ethic of conspicuous consumption orders our social relationships and defines us in many ways, including whether we are successful. But the authors do not simply argue against this virulent, mindless kingdom. Rather, they propose an alternative kingdom in which neighborly people serve the common good. This way of defining the communal identity, they argue, is long overdue but, more than that, is possible if these core spiritual values are adopted and lived out. Like religion scholar Martin E. Marty, author and theologian Walter Brueggemann seems never to have had a thought that hasn't been published. This book is more evidence of why that's a good thing.

-- The Christian Wallet: Spending, Giving, and Living with a Conscience, by Mike Slaughter. This book would be a good companion for An Other Kingdom, just mentioned above, in that it focuses on the call not to be simply consumers but to be producers in harmony with eternal values. The author, a pastor in Ohio, wants Christians to understand how their use of money forms them and informs others about their core values. In a culture that wastes huge amounts of money on luxuries that do nothing for the spirit, this consumerism is an idol that is misshaping our souls. This and the previous book not only identify the problem but offer some ways toward a solution.

-- Sparrow: A Journey of Grace and Miracles While Battling ALS, by Jennifer R. Durant, with Matthew P. Durant. Anyone who has known someone suffering from amyotrophic lateral sclerosis (ALS, or Lou Gehrig's disease) knows it is a cruel illness that slowly destroys life. This lovely little book, published a year after her death in 2015, recounts Jennifer's path through ALS. She was seeking ordination as an Episcopal priest when she was struck by the disease. The old question of theodicy -- Why is there suffering and evil in the world if God is good and loving? -- is the canvas on which this book is painted.

-- Remembering God's Mercy: Redeem the Past and Free Yourself from Painful Memories, by Dawn Eden. This small book is published to coincide with the declaration by Pope Francis of a Holy Year of Mercy. It's about healing memory and coming to terms with the pain in one's past. In the author's case, it had to do with childhood sexual abuse and the post-traumatic stress syndrome that resulted. For help, she draws on the thinking of both Pope Francis and St. Ignatius.

-- Divine Mercy for Moms: Sharing the Lessons of St. Faustina, by Michele Faehnle and Emily Jaminet. This book, too, is tuned to the pope's Year of Mercy. The authors, leaders of the Columbus Catholic Women's Conference, use the life and writings of St. Faustina to talk about mercy, motherhood and "service and love toward others," which, they write, is what motherhood is all about. If you don't read this book, I invite you at least to click on the link I've given you to St. Faustina, a nun from Poland.

-- Transformed by God's Word: Discovering the Power of Lectio and Visio Divina, by Stephen J. Binz. Many Catholic and Protestant Christians are familiar with the practice of lectio divina, a deep way of reading the sacred text that brings the reader into the passage. They are almost certainly much less familiar with visio divina, a deep way of seeing the sacred through the kinds of icons common in Orthodox Christian churches. This new book provides six steps that wind up combining those two approaches to scripture. That author calls this "formational reading of the gospels and other sacred texts" and says it "shapes us to be like Christ."

-- The Four Purposes of Life: Finding Meaning and Direction in a Changing World, by Dan Millman. The question of life's purpose has been posed since the first human beings realized they had both brains and souls. The author distills -- or perhaps expands -- the answer not to just one purpose but to four areas in which to find meaning. He says that the world is a school designed to teach you how to live in it in an authentically spiritual way, and this book can help guide you. You can learn more about the author and his many books at this website.

-- Seven Last Words: An Invitation to a Deeper Friendship with Jesus, by Fr. James Martin. Several times over recent years I have been one of the speakers at a Good Friday service in Kansas City at which speakers tried to unpack the so-called Seven Last Words of Christ spoken from the cross between musical settings of Joseph Haydn's amazing "Seven Last Words of Christ." It's always a humbling and moving evening. In this book, the prolific Father Martin offers his own homilies about what each of the words means.

-- Bringing Lent Home with Pope Francis: Prayers, Reflections, and Activities for Families, by Donna-Marie Cooper O'Boyle. This -- which I'm alerting you to several weeks too late (sorry) -- is a Lenten daily devotional booklet that draws inspiration from Pope Francis, both his life and his teachings. But it'll still be good for next year's season of Lent.

-- Stations of the Cross, with the Eucharistic Heart of Jesus, by Fr. William Prospero, edited by Fr. James Kubicki. The tradition of doing the 14 stations of the cross is deeply embedded in Catholicism and only slightly less so among Anglicans. But it is spreading to other Protestant churches. In fact, my own Presbyterian congregation offers Stations of the Cross now each Good Friday. The meditations in this book were written by a Jesuit priest who died in 2014 and are intended for private, not group, devotions.

-- The Justice Calling: Where Passion Meets Perseverance, by Bethany Hanke Hoang and Kristen Deede Johnson. There is considerable interest in the U.S. and elsewhere these days in what might be called issues of social justice -- from environmental degradation to economic oppression and mass incarceration. This book is a call to ground the passion for repairing the world in God as revealed in Jesus Christ. They authors argue that authentic, effective ministries of justice need this religious footing, deeply grounded in scripture, to stay on the right path.

-- To Heal, Proclaim, and Teach: The Essential Guide to Ministry in Today's Catholic Church, by Jared Dees. This book seeks to draw lessons from the life and ministry of Jesus to shape what Catholic ministry should look like. He says that as a rule Jesus first healed, then proclaimed the gospel and finally taught, in that order. That, Dees argues, is how churches should do it. He offers lots of guidance and cautions each step along the way, including, when doing proclamation, to avoid seeming to be "simply too religious to be believable."

-- Mala of Love: 108 Luminous Poems, edited by Ravi Nathwani and Kate Vogt. If this book were dessert, it would be a rich, dark chocolate covered by more rich, dark chocolate. The small poems from mystics, poets and others (from Rumi to Shelley to Dickinson and more) should be absorbed slowly -- maybe one a day -- to avoid overdosing on their tightly packed words full of richly layered meaning. Really. Take 108 days to read this.

-- Room 24: Adventures of a New Evangelist, by Katie Prejean. This is a book by a teacher in a Catholic high school about how she learned to communicate the gospel to anxious and distracted students who often wound up teaching her. As she writes, "If my students memorize the Ten Commandments and recite the Beatitudes then they will pass my tests and have a great party trick for college. If they were not following those Commandments and living out those Beatitudes then I have failed them as a classroom evangelist."

-- A Son's Vow, by Shelley Shepard Gray. This is another in the author's growing list of novels set in Amish life and culture. It's part of her new "Charmed Amish Life" series.

-- Lord of the World, by Robert Hugh Benson. This is Ave Maria Press's republication of a 1907 futuristic novel in which Catholic life is falling apart and a mysterious, charismatic man with the telling name of Julian Falsenburg becomes the world's leader. The book gained traction last year when Pope Francis mentioned it and advised people to read it.

The new Facebook emoji icons are fine, this Forward writer says, but where are the icons that Jews need most? You know, one that lets someone kvetch, for instance. Or declare, "Oy." It's a fun piece.

P.S.: If you're in the Kansas City area, I hope you'll join me March 7 at the American Public Square event called "Muslim in the Metro." More information, including how to register, is at the link I've given you here.