In recent days, Pope Francis (pictured here) has aimed his words in a James-like way at people who simply talk about faith but don't show that faith by their actions. 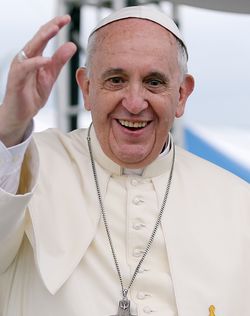 The New Testament book of James, you may recall, says that faith without works is dead. The Bible, as Francis correctly notes, says we are to be doers of the word and not hearers only. (And, by the way, the word is love.)

In a recent sermon, Francis talked about how just talking about faith and not doing it is "faking being a Christian."

I don't disagree with the pope at all. And although I thought his words could have been less personal when, before that sermon, he declared that Donald Trump does not act in a Christian way, I didn't disagree with him about that, either.

But there is a caution to toss out here. Francis is the pope. We are not. Part of his job is to promote the faith and declare with some clarity what constitutes behavior and belief in line with at least the Catholic version of Christianity.

The job of Christians who are not pope or even ordained to the gospel ministry is different. We are to share the good news of Jesus Christ and we are to try to live in such a way that, as the old hymn goes, "they will know we are Christians by our love."

My job is not to draw lines that say you're in and you're out based on my reading of how you live and what you believe. Oh, I can engage you in conversation about all of that and tell you what I think authentic Christianity looks like in practice, but when I set myself up as the judge of whether you're a Christian or not, I quickly slide into the kind of judgmental pronouncements against which Jesus himself warned.

I'm not arguing against standards or against discernment. Rather, I'm arguing against arrogance, presumption and false certitude. And I'm arguing for a sense of humility in these matters, given that living a Christian life fully and openly is perhaps the hardest thing I can imagine doing. All Christians get some of it wrong every day. And on some days we get all of it wrong.

So I'm content to leave the pronouncements about who is faking Christianity up to the pope, though even he might do well to show rather than tell.

(For more about what I think the pope gets right and where I might have some disagreements, see my latest book, co-authored with the Rev. Dr. Paul Rock, Jesus, Pope Francis and a Protestant Walk into a Bar: Lessons for the Christian Church.)

THE MANY DIVISIONS IN ISLAM