If you've ever been to the Holy Land, as it's long been called, you know that there are lots and lots of shrines, churches and monuments built on sites said to have been the location of this or that biblical happening. 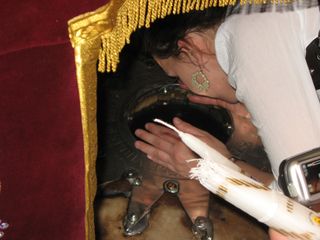 For Christians, one of the most famous is the Church of the Nativity in Bethlehem. I first was there on Christmas Eve of 1957, when it was located in the Hashemite Kingdom of Jordan. I returned there in 2012, though this time Bethlehem was on the Occupied West Bank and under the control of the Palestinian Authority.

That church is undergoing some major renovation work, and this Associated Press story describes what's happening there.

Here's a key paragraph from the story: "The project, partially funded by the Palestinians and conducted by a team of Palestinian and international experts, is the biggest restoration at the iconic church in some 600 years. The removal of centuries of dust has left Crusader-era mosaics sparkling in sunlight filtering through brand new windows. Structural repairs on the fragile rooftop and windows have been completed and art treasures have been returned to their delicate elegance."

All of which is a good thing.

But I want to offer two words of caution about not just this shrine but about similar shrines around the world.

There has been a long debate in Christianity about the place of Jesus' birth. The birth narratives in the gospels of Matthew and Luke make up only evidence we have, and it's far from clear exactly what is history and what is midrash, or commentary, in those books. The French scholar Ernest Renan, in fact, concluded that Jesus was born not in Bethlehem but in Nazareth. The Bethlehem story was important as a way to connect Jesus with the ancestral line of King David, so some scholars think that's why it's in the birth narratives, not because it really happened there.

The other concern, of course, is about idolatry, which is why the First Commandment -- no other gods before God -- is first. Eventually all sin comes down to idolatry. And it's easy to focus on a huge, ornate, expensive building that you can see instead of on God, whom you can't see.

And when all these religious sites -- temples, shrines, monuments, even cemeteries -- become little more than an economic engine for tourism, their purpose gets distorted. They should be thought of not as valuable in themselves but as icons, meaning a window or gateway into the divine heart.

I hope that's what the Church of the Nativity will be in its refurbishment for visitors, no matter where Jesus was really born.

(In the photo here today, which I shot in April 2012, you see a tourism bending down to kiss the grotto star in the Church of the Nativity in Bethlehem said to mark the exact spot where Jesus was born. Was she worshiping that star or Jesus? I should have asked her.)

Pope Francis has begun a new drive to abolish the death penalty everywhere. Good. It's hard to understand how anyone can be called "pro life" who supports capital punishment, a costly, error-ridden, revengeful system that shames every government that uses it.