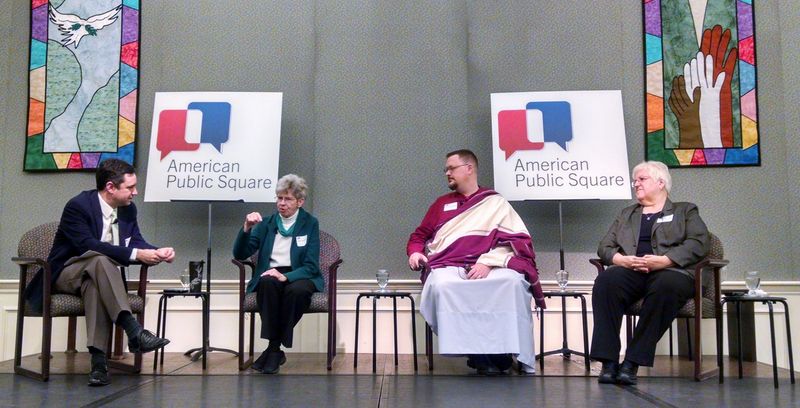 So a nun, a lama and a Quaker walk into a church.

This actually happened one morning last week and it not only wasn't a joke, it was a chance for each of them to learn something about the religious tradition of the other, while the rest of us listened in.

That's what dozens of us did at Village Presbyterian Church in Prairie Village, Kan., in a program called "Varieties of Spiritual Experience: East and West," under the sponsorship the American Public Square as part of the APS faith series.

My job was to be ready to ring the "civility bell" if the discussion turned uncivil. It never did. Not even close as Sister Cele Breen of the Sisters of Charity of Leavenworth, Lama Matthew Rice, spiritual director of the Rime Buddhist Center in Kansas City, and Shirley Scritchfield, clerk of the Penn Valley Religious Society of Friends, spoke about their experiences. The Rev. Brian Ellison, executive director of the Covenant Network of Presbyterians, was the moderator. (In the photo above, you see, left to right, Ellison, Breen, Rice and Scritchfield.)

Some of the differences in approaches to spiritual practices were profound, as described by the panelists.

For instance, Breen described how her community is deeply liturgical, praying aloud and together six mornings a week and attending Mass on Sundays. By contrast, Scritchfield described how sometimes at a Quaker service those attending sit in complete silence for a full hour.

"We as a community," she said, "are sitting in silence, trying to connect to that piece of God or divinity within each of us." Scritchfield over the years has had experience with both Presbyterian and Catholic worship, too, but said she found her home in the Quaker tradition once she decided that "I could not allow someone else to speak for me."

What was clear from the hour-long conversation is that it is terribly difficult for any single person to speak on behalf of a whole faith tradition. As Ellison noted, "there is a variety of spiritual experience within every tradition," and different approaches within not just each tradition but even within a single congregation.

Rice, for instance, noted that generally someone new to Buddhism learns at first about its basic approaches to spirituality, almost as if there were a homogeneous approach for all Buddhists -- "and then you discover all these different traditions." Although the Rime Buddhist Center is rooted in the Tibetan tradition, he said, it attempts to bring in speakers who can introduce members to other approaches.

The APS faith series is an effort to educate the community in religious literacy. That kind of literacy is crucial if we are to learn to live in religious harmony with people of lots of different traditions -- and of none. I hope you'll watch for other upcoming APS events that have to do with this subject, including the next one on March 7 called "Muslim in the Metro." You can find all the APS events listed here.

THE U.S. AS SEEN FROM CANADA

Lots of commentators from the U.S. have been talking about the role of religion in the presidential race. But here's a look at it through Canadian eyes. It's almost always helpful to see ourselves as others see us. Speaking of Canada, did you know it's running for president of the U.S.? Yep, the whole country. Well, at least that's what a guy in this video says.