It gets harder and harder to be a young-Earth creationist -- someone who believes that Earth is no more than, say, 10,000 years old. 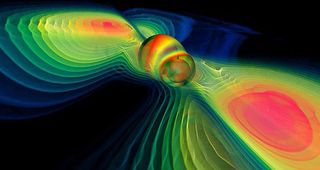 The latest challenge to that ridiculous position comes from scientists who have just measured gravitational waves for the first time -- waves set off a billion years ago by the merger of two black holes deep in space.

From a scientific perspective, this was huge news. It confirmed the final prediction about the space-time continuum made by Albert Einstein. Although scientists will want to replicate the results to be triply sure, they are convinced already that the small chirp they heard is the first direct evidence of the gravitational waves Einstein predicted early in the 20th Century.

If you're interested in what all this really means in ongoing scientific work, I direct you to this Atlantic Magazine piece. As the piece points out, "As good as Einstein’s theory of general relativity is, it suffers from the fatal flaw of not being compatible with quantum mechanics, our best theory of the universe on very small scales. Most physicists feel that quantum mechanics will ultimately prove to be more fundamental than relativity, which is to say that the two theories will be reconciled by finding some quantum theory that reproduces general relativity in the right circumstances."

But from the perspective of religion, what does all this mean?

Well, one thing I think it means is that when scientists are measuring gravitational waves that have been traveling toward us for a billion years, it's impossible to reconcile that with a literalistic reading of the Bible that concludes Earth is only a few thousand years old.

It also means that we must build into our religious -- and ultimately cultural -- understandings a place for the mysteries of quantum physics. We must become more comfortable with Werner Heisenberg's "Uncertainty Principle," proposed almost a century ago, in 1927.

Since that time, in science, in religion, in all areas of life, we've had to come to terms with the reality that reality itself is not as cut and dried, not as black and white, as it once seemed. We must learn to live with ambiguity, with paradox. In terms of religion, we must understand that we live by metaphor, by myth, by allegory.

This does not mean that there are no certainties in life, no matter on which we can bet the farm. Drop a bowling ball on your toe and it's going to hurt -- and it's not going to fall upward, either, unless you're in weightlessness somewhere, like on a space craft. And in religion you can pledge allegiance to certain propositional truths and live as if they are, in fact, true, because as people of faith we walk not by sight but by faith, as the Apostle Paul reminds us in II Corinthians 5:7. (Note to Donald Trump: You might want to call that Second Corinthians, not Two Corinthians.)

But it does mean that the creation is infinitely more complex and mysterious than previous scientists -- Aristotle, Newton and others -- imagined. So complex and mysterious and, at times, downright weird, in fact, that it is humbling -- or should be. But such scientific breakthroughs should help us to look anew at the eternal questions about how the cosmos came to be and, more to the point, why.

As author Marilynne Robinson writes in her book The Givenness of Things, "Cosmic and miscrocosmic being are so glorious and strange that nothing marvelous can be excluded on the grounds of improbability. . ." What we are gaining with scientific advances, she writes, is "knowledge that has as it signature a radical resistance to simplification, to understanding in terms of any known language of causality."

I love to follow scientific progress and then, as a recent sermon series at my church tried to do, connect science and religion to see what they might have to say to each other.

In the end, plenty. But it requires some humility on both sides to listen.

(For those of you who would like to read a science group's news release about the first measurement of gravitational waves, here one is from the Harvard-Smithsonian Center for Astrophysics. And here is one from the Institute for Astronomy at the University of Hawaii.)

(The illustration seen here today is from here, and carried these cutlines: "Two black holes coalesce in a still from a numerical simulation. Such predictions, based on Einstein's theory of general relativity, match exactly what LIGO scientists discovered on September 14, 2015." MPI for Gravitational Physics / Werner Benger / ZIB / Louisiana State University.)

WHY WE NEED A NINTH SUPREME COURT JUSTICE

It turns out that the death of U.S. Supreme Court Justice Antonin Scalia will have an almost-immediate effect on cases before the court now that at least touch on religious issues, this analysis says. It's hard to imagine how this divided court can function well with lots of 4-4 ties -- another reason to get a replacement for Scalia on the court soon.

P.S.: I hope you can join me at 7:30 a.m. Thursday at Village Presbyterian Church in Prairie Village, Kan., for the next panel discussion in the Faith Series being presented by The American Public Square. For details and to register, click here.