Another National Prayer Breakfast has come and gone -- this time without a ton of media coverage. President Obama (pictured here) showed up again -- as all presidents have done since Ike in 1953 -- and made a pretty unsurprising speech. 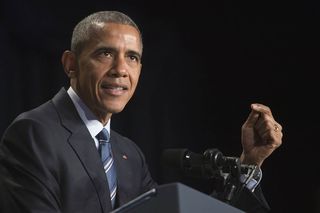 You can judge that for yourself by reading the transcript.

What's long fascinated me about this annual inside-the-beltway tradition is how an especially evangelical branch of Christianity has been its founder and backer and how in many ways it's an event not acknowledging religious diversity in this country but, rather, mainstreaming conservative Christianity.

As the Time Magazine history of the event (I've linked you to it above in the phrase about Ike) notes, it was created as a project of International Christian Leadership, the name that group's founder, Abraham Vereide, gave to his movement (it continues to exist today, now known as the Family or the Fellowship).

Journalist Jeff Sharlet wrote a book about this group a few years back. It's called The Family: The Secret Fundamentalism at the Heart of American Power. It's a disturbing read. I wrote about that book in my Kansas City Star column when it came out and later mentioned it here on the blog when I introduced readers to Sharlet's next book, C Street: The Fundamentalist Threat to American Democracy.

I think the use of the word "Fundamentalist" or "Fundamentalism" is theologically misleading in the books' subtitles, given that many people connected with The Family would not identify themselves as fundamentalists. Still, if you really want a thorough picture of the forces behind the annual prayer breakfast (and their widespread influence) in Washington, Sharlet's writing is a must.

I have no objection to any president accepting an invitation from a non-governmental group to speak at a prayer breakfast. But I wish this one didn't have "National" in its title, making it seem like it has some kind of governmental sponsorship. And I wish that if there is to be some kind of truly national event like this, it and its leadership would be much more representative of the American religious landscape.

We should be the most religiously welcoming country on the planet. Events like the National Prayer Breakfast send a different message.

(The photo here today came from this NBC News site.)

A BONANZA FOR THE JESUITS

I love this RNS story about a Kansas City teacher -- seemingly of modest means -- who gave $2 million to the Jesuits when she died. May the Jesuits show their gratitude to Anna Kurzweil by spending it in ways that would honor her life of teaching and giving and care.