By late this summer, my next book will be out, and its subject relates to a magazine article I will link you to today. The book is to be called The Value of Doubt: Why Unanswered Questions, Not Unquestioned Answers, Build Faith. 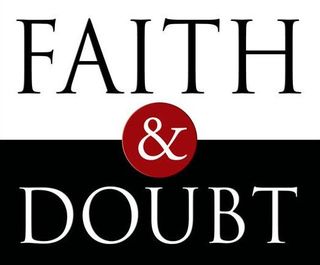 In it, I will describe how important it is to go through the valley of the shadow of doubt before we can own deep faith. Indeed, I'm pretty sure that if you can't or don't ask the hard questions about religion, about God, about human purpose, such faith becomes impossible.

One of the people who began to ask those kinds of questions was the granddaughter of the late Fred Phelps, the disbarred lawyer whose Westboro Baptist Church in Topeka has become synonymous with hate, especially directed toward gays and lesbians. Fred's theological goons have even picketed me personally five different times and blamed me for the death of my nephew on 9/11 because I had expressed ideas in print suggesting that gays and lesbians should be treated as equals under the law. Thus, in the church's twisted thinking, Karleton's death was my punishment for that. Really. That's what the Phelps clan insisted.

Within the Phelps family, Fred's daughter, Shirley Phelps-Roper, became a prominent face, leading protests and speaking for the group in various public ways. Her daughter, Megan Phelps-Roper, was also deeply committed to the church's Taliban-like theology and became quite active as the Twitter and other social media voice of the church.

Until, that is, in her mid- to late-20s, Megan began to have doubts about whether the church was right in its various positions.

This New Yorker piece (it's a long read, but well worth it) tells her story.

What especially struck me were two passages in it that mention doubt.

The next day, she (Megan) mentioned the possibility of leaving (the church) to (her sister) Grace. Grace was horrified. “It just sounded ridiculous to even suggest it,” Grace told me. “These were the points I brought up: we’re never going to see our families again, we’re going to go to Hell for eternity, and our life will be meaningless.” Megan, still uncertain, agreed. But she plunged into a profound crisis of faith. “It was like flipping a switch,” she said. “So many other thoughts came in that I’d never pursued, and that’s every doubt that I’d ever had, everything that had ever seemed illogical or off.”

When they were together, Megan engaged Grace in interminable theological conversations. When they were apart, Megan detailed her doubts in text messages. One day, she texted Grace, “What if the God of the Bible isn’t the God of creation? We don’t believe that the Koran has the truth about God. Is it just because we were told forever that this is How Things Are?” She added, “Does it really make you happy when you hear about people dying or starving or being maimed? Do you really want to ask God to hurt people? I ask myself these questions. I think the answer is no. When I’m not scared of the answer, I know the answer is no.” Two days later, she texted Grace about Hell: “Why do we think it’s real? It’s starting to seem made up to scare people into doing what they say.” Grace replied, “But what if?”

Later in the piece, we find this about doubt:

(Megan) Phelps-Roper spent the summer and the fall in an existential spiral. She would conclude that everything about Westboro’s doctrine was wrong, only to be seized with terror that these thoughts were a test from God, and she was failing. “You literally feel insane,” she said. Eventually, her doubts won out. “I just couldn’t keep up the charade,” she said. “I couldn’t bring myself to do the things we were doing and say the things we were saying.”

So doubt -- and one young woman's response to it -- rescued another person from the prison of false certitude.

Understand that I don't recommend people simply stop at doubt. That would leave them nowhere. Rather, doubt is a tool to be used to test truth claims, to find one's way through the darkness, to do what I John 4:1 proposes: "Test the spirits to see if they are from God. . ."

This side of paradise, all theology must in some way be provisional. Failure to understand that leads to the kind of destructive theological rigidity we continue to find at Westboro Baptist, among followers of al-Qaida and ISIS and among adherents of many other narrow, fundamentalist approaches to the eternal questions. What the world needs is none of that nonsense.

The executions conducted over the weekend by the government of Saudi Arabia were appalling -- as all executions are. But in this case, there is religious fallout, and it's not pretty. One of those executed was a Saudi Shi'a cleric, and that has led to a disruption in diplomatic relations between Saudi Arabia and Iran (as well as a few other countries). Saudi Arabia, as most of you know, is home to the rigid Wahhabi brand of Sunni Islam and has been so since the founding king, known as Ibn Saud, created the modern kingdom in 1932 and worked out a bargain with the religious leaders at the time: They would let the House of Saud rule and the House of Saud would give Wahhabi leaders enormous freedom to promote their harsh approach to Islam. That bargain still holds, and it has been costly in many ways not just to the people in the kingdom but also to the world as the Wahhabists have spread their views around the world, often giving succor to radical visions that eventually lead to terrorism. It was no coincidence that the vast majority of the 9/11 hijackers were from Saudi Arabia, as was Osama bin Laden. The U.S. has been in bed with the House of Saud for a long time because the kingdom has provided so much of the oil Americans burn. And this latest sorrowful news event is unlikely to change that. But all Americans need to be aware of the ways in which our friendship with the Saudi leaders is also making us enemies elsewhere. Here, by the way, is the Arab News story about the break in Saudi-Iranian diplomatic relations. Arab News at times has shown considerable independence in its coverage but, as in this case, the restrictions on press freedom there mean it often simply serves as a mouthpiece for the government.