For their original hearers, the parables that Jesus told were packed with shock, subversion and, sometimes, mystery. 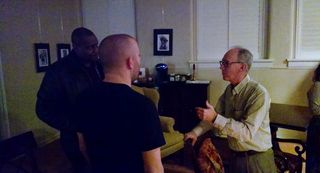 Today we have pretty much domesticated those parables, sucking the life and blood and pizzazz out of them, so each of them can be used to make some semi-obvious 21st Century point.

That's why Vanderbilt New Testament scholar Amy-Jill Levine wrote her latest book, Short Stories by Jesus, and why she's coming back to Kansas City on March 4 and 5 to speak at Village Presbyterian Church. A group I'm part of brought her to Kansas City this past October, when I wrote this blog entry about her.

The parables also were the subject on Sunday night for David May, who teaches New Testament at Central Baptist Theological Seminary in suburban Kansas City. Speaking at The Open Table at Second Presbyterian Church, David took three parables found in Matthew 25 and helped listeners hear them the way 1st Century Jews listening to Jesus would have heard them.

When it came time for some questions and discussion after his presentation, I asked him this: "Reading Amy-Jill Levine's new book has left me with the impression that we get almost all the parables wrong. And I wonder if that's your belief as well. You've given us three that we get wrong. Do we get the rest of them wrong as well?"

To which David replied, simply, "Yes, I think so." And then he added this: "We get them wrong because we are arm chair interpreters. You can't interpret a biblical parable sitting in a study in a comfy chair with your feet up and with a glass of iced tea and know these 1st Century people. One of the first things you have to do is you have to go to the land -- see the land, see the people."

To interpret 1st Century Jewish stories clearly and accurately, he said, we also need to "get a feel for how people thought in that day and age. I think that would go a long way to turn the parables upside down that we have domesticated."

It's much too easy simply to skim sacred writ and imagine that we understand its meaning and purpose. To appreciate the richness of what's really there, however, requires an investment of time and study on our part.

(In the photo here today, you see David May, right, conversing with Kevin, left, and Josh, who attended The Open Table gathering Sunday evening.)

AN LGBTQ UNDERGROUND AT WHEATON

It should come as no surprise that in a gay-unfriendly place like Wheaton College, which has been in the news lately for wanting to fire a teacher who showed solidarity with Muslims, there is a gay underground. This story describes the efforts it takes to be gay on a campus where homosexuality is officially banned and viewed as sinful. Some day this will end -- as it has in many places in the U.S. in recent years -- but not soon at Wheaton.