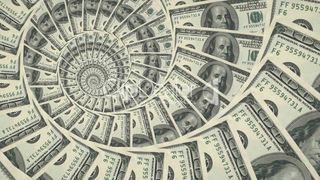 Christian churches rely on free-will gifts, though most often those include money pledged by congregants in annual pledge drives that usually occur about this time of year. Pledge Sunday at my church, for instance, happens Nov. 1 this year.

Jewish congregations, however, mostly have operated on a dues model. Members are charged a set amount (or a sliding-scale amount) that is supposed to pay for staff, upkeep of the synagogue, educational programming and other costs.

But as Tablet Magazine reports, more and more synagogues are moving to more of a Christian financing model, which is to say a model that relies on a pay-as-you-wish model. And although the jury still is out among some congregations that have switched, it seems to be increasingly popular and to be meeting the needs of the congregations that have adopted it.

As the report says. "In recent years, a small but growing number of shuls have abandoned what had been the dues model, which had been the primary source of financing Jewish religious life ever since bidding for well-located pews fell out of style in the early 20th century."

In the early history of the U.S., some Christian congregations also raised money by, in effect, renting the best pews to members. But eventually that non-egalitarian system ran into critics (as it should have) and got replaced by free-will donations, including those made to endowment funds to support churches over the long haul.

The primary thinking behind the commonly used free-will system in Christian congregations is that members should feel motivated to give to God's work because God has be generous to them in countless ways. That's a "stewardship sermon," as they're called, in a nutshell.

My guess is that a growing number of Jewish congregations will move away from a dues system to a free-will offering system. For one thing, it allows the rabbis and other congregational leaders to plug in a bit more theology in describing why members should give. But that's just a guess. Ask me in 10 years.

WHEN FAITH LEADS TO VIOLENCE

P.S.: Don't forget that Vanderbilt New Testatment scholar Amy-Jill Levine will be in Kansas City to speak at several public events Oct. 21-25. You can find her schedule here. She's terrific. I hope you will get to at least one or two of her presentations. Here is the story The Kansas City Star published about Levine in Saturday's Faith section. It includes an interesting e-mail interview with her. And here is the story about her visit published in the Kansas City Jewish Chronicle.

ANOTHER P.S.: David Crumm, former Detroit Free Press religion writer who now runs ReadTheSpirit.com, has done a terrific cover story today about the new book Paul Rock and I have written, Jesus, Pope Francis and a Protestant Walk into a Bar: Lessons for the Christian Church. It is to go live some time today and when it does you can have a look here.