No doubt at some point every parent has felt some disappointment in the choices that his or her children have made. I know my own parents did now and then. 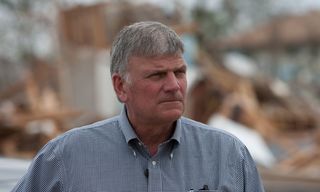 Still, much of that experience happens in private, within family walls. It can be different for celebrities, especially for famous people whose children decide to enter the same line of work as their parents.

I'm thinking now of the famous evangelist Billy Graham and his son Franklin (pictured here), also an evangelist. Over the years, it has seemed to me, Billy has mellowed, become not quite as doctrinaire, more willing to imagine other ways of being faithful.

Franklin, on the other hand, seems to be moving in the opposite direction. While once rightly praised for the good humanitarian work his ministry, Samaritan's Purse, was doing, he now is attracting commentary highly (and often rightly) critical of his rigid, even hateful, views on a variety of subjects.

The most recent example of this disturbing trend, the piece notes, is his statement "that all Muslims should be barred from immigrating to America and treated like the Japanese and Germans during World War II."

It was the kind of bigoted approach reflected in an e-mail an old friend sent to me recently that included a long diatribe about Muslims being responsible for all terrorism, here and abroad. Pretty much all Muslims. Pretty much all terrorism. Included in my response to my friend, who sent this along to ask how much of it was true, was my observation that "all" terrorism would include the Oklahoma City bombing committed by non-Muslim Timothy McVeigh and the Palm Sunday 2014 murders at Jewish sites in suburban Kansas City committed by a non-Muslim neo-Nazi.

When you use "all" you almost inevitably say too much, stretching the truth until it squeals.

Franklin Graham's hostile positions on LGBTQ issues and on racial matters have turned off a lot of people who have admired his father's ability to hold conservative or traditionalist positions without seeming hateful.

I don't, of course, know what Billy thinks privately about Franklin and what the Atlantic piece calls his "pot of partisan porridge," but I cannot imagine that it makes him happy. But if I know Billy Graham (and I've met him and interviewed him), I know he will continue to love Franklin no matter what. And he'll continue to hope that Franklin's life and words might reflect a similar kind of love for others.

TARGETING JEWS IN THE U.K.

Antisemitism appears to be on the rise in Britain, based on how many antisemitic acts were reported in the first six months of this year. In fact, as we've known now for several years, there's been a global resurgence of antisemitism. It's the ancient hatred non-Jews can't seem to get over and every act of antisemitism shames them.