Home Archives Profile
How we triangulate into antisemitism: 4-30-15
The struggle for same-sex equality: 5-2/3-15

When a neo-Nazi white supremacist (allegedly) murdered three people a year ago at two Jewish sites in suburban Kansas City, Mindy Corporon (pictured here) suffered a double disaster. Both her teen-age son, Reat Underwood, and her father, Dr. William Corporon, were shot to death. Also killed that day was Terri LaManno, who, like the other two victims, was a Christian. 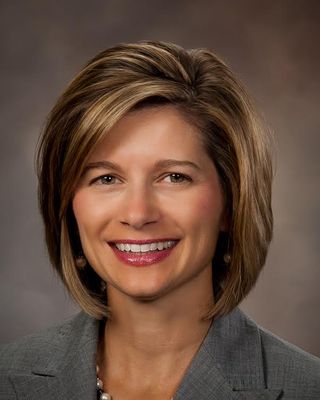 That night, at a prayer vigil at which I spoke, Mindy showed up to thank people for caring. It was quite amazing to see her there at all, much less speaking coherently and cogently after such a trauma.

Over this past year I have wondered about how she has come to think about evil and suffering, given what she and her family went through. But I wanted to wait until at least a year had gone by to let her process this catastrophe before asking her about that. One of the ways she did that processing work was to help put together the recent "Seven Days: Make a Ripple, Change the World" events.

With that behind her, I sat down with Mindy earlier this week and we talked about evil.

I discovered a woman who, from her perspective as a member of a United Methodist congregation, has given lots of good and deep thought to this matter. She isn't one to drift into easy answers or cliches. She recognizes that the world is complicated and that the old question of why there's evil in the world if God is good and powerful does not lend itself to simple, quick or exhaustive answers that satisfy everyone.

Prior to the shootings last year, she said that the event she understood to be evil and that touched her most deeply was 9/11, when terrorists murdered nearly 3,000 people (including my own nephew).

"The Oklahoma City bombing (1995) affected me because I had lived in Oklahoma City," she said, ". . .but after I had Reat, it's just different after you have children. Of those two, 9/11 was more impactful. I had been in those Twin Towers before and had never been to the Oklahoma Federal Building."

And yet, she said, "it's not as though evil touched me personally during my life (in a way) that gave me any building blocks or any thought processes about how to work through evil" after her son and father were murdered.

The ancient question of theodicy -- why there is evil and suffering in the world if God is good and powerful -- is one I asked Mindy to address in light of the evil she experienced last year.

"I'm still working on it," she said. But she said she feels different about approaching such subjects a year after the shootings. How so? I asked.

"Well, I don't feel crippled. I mean (at the time) you just feel crippled and you can hardly function. But you know I'm not sure if it (evil) goes back to Adam and Eve and Eve took the apple from the tree and that was it. And we've got free will and there you go."

The idea of so-called "Original Sin" has informed much of Christian theology for centuries, though in recent years some theologians have begun to challenge the idea inherent in Original Sin that humans are born sinners. They are focusing instead on the biblical witness that God declared the creation "good" and humanity "very good." These are the tensions that Christians today trying to wrestle with the theodicy question are obliged to consider.

But, she said, if God knew it might happen and it did, in fact, happen, "then my job is to say I can now help other people. And that is my responsibility. . .I feel like I have such a responsibility to God, to my Dad, to Reat, to other people to show them that there is evil in the world and that we who are still here have to overcome it."

Mindy was clear that she did not believe her son and father died just so she could take on that responsibility. Rather, she said, she believes that her accepting that responsibility is her response to the evil that befell her family.

Mindy explained why she showed up at the prayer vigil the night of the three murders: "People are going to think that God killed them. And I'm the person to tell them that God didn't kill them."

I asked her whether she's discussed the question of evil with the Rev. Adam Hamilton, senior pastor of her congregation, the United Methodist Church of the Resurrection in Leawood, or other members of the COR staff.

She said that the COR staff has felt Mindy grasps what she needs to know about evil to get through this crisis "so we really haven't sat down and had deep discussions about it." But, she said, "I've asked Adam a few times things that were really bothering me. I asked him, 'When am I going to see Jesus, because I really don't want to be here any more. I would rather be in heaven. So when is that happening?' I did. I thought, 'Maybe this means the world is ending because my world was ending so maybe it means the world is ending for everyone.'"

But, she said, she didn't like Adam's answer: "His answer was that he thinks we'll see Jesus at our death. And I wasn't happy with that answer."

I asked her what she wanted him to say.

"Oh, yes, we know Jesus is coming. Like maybe May 30 or something," she replied, laughing a bit. "And we'll all be able to get back together with our loved ones and it'll all be OK." But Adam Hamilton, a wonderfully creative and thoughtful Mainline Protestant pastor whom I've known a long time, is not given to such date-setting prophecies and would never promise an early Second Coming even if it was an answer someone wanted to hear.

In the end, Mindy concluded something she recently told a friend: "Life can take the breath out of you, but it's God and your friends who can put the life back into you."

Mindy's experience also has her thinking and rethinking about what she believes about the sources of evil and whether there is a personified devil, often called Satan.

After the shootings, interviewers and others talked with Mindy about "this crazy person," the shooter, but her immediate and clear response has been, "He is not crazy. He is evil. And there is a difference. . .This man does not have a mental incapacity. He is evil and he just wanted to kill Jews for his own reasons and that is evil."

She's also clear that "there is evil without having to blame it on a personified Satan. And I think where that evil comes from is that they (people who commit evil deeds) can't have peace . . .So they choose evil as an action instead of love as an action."

I asked Mindy if she could imagine any circumstances in which she might be able to offer forgiveness to the man who killed her father and son.

"I don't think it's my responsibility to forgive him," she said. "I think that that is God's. I think if you break a commandment, you answer to God. I feel sorry for him. People have asked me how I feel about him, and I feel sorry for him that he has no peace, that he has been taken over by evil, for whatever reason. . .What I don't want to do is give him any publicity. I don't want to give him a platform. I have no idea (about changing him), nor do I think that I could change him. . .I owe it to my Dad and Reat to hold their memories up and talk about what they did and how good they were rather than dwell on the man who took their life."

She's also thought about why she has reacted the way she has to this evil:

"I didn't choose anger," she said. "What I've learned is that when you experience trauma your natural tendencies come out -- whoever you are innately. And I'm not innately an angry person. But who I've chosen to get mad at when I get mad is I get mad at God. And then he helps me heal. So that's really helped. I can get mad at him and then immediately he helps me heal."

Mindy Corporon and her family -- as well as the LaManno family -- are still healing, of course. And no doubt will be for the rest of their lives. But Mindy is walking through this darkness with help from friends, family and a loving faith community. And she's willing to ask the hard questions of faith, even if sometimes she doesn't like some of the answers she finds.

THE FAITH OF BERNIE SANDERS

To my surprise, it looks as if Bernie Sanders, the independent senator from Vermont who usually votes with the Democrats, is going to run for president on the Democratic ticket. He's got an intriguing faith background, which Religion News Service unpacks here.