How we triangulate into antisemitism: 4-30-15

There is no shortage of theories about why the world has been plagued by antisemitism for centuries. Nor is there a shortage of books about this subject. 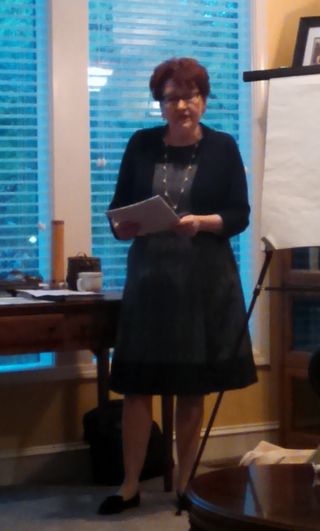 If you haven't read much about this matter and want a few book ideas to start, let me recommend:

However, in all of those -- and quite a few others I've read on this subject -- I had not run across the analysis I heard the other evening by Dr. Mary Greenberg, a former University of Kansas teacher and a member of the State of Kansas Holocaust Commission.

She spoke to a group from Temple Israel of Greater Kansas City, the rabbi of which is Jacques Cukierkorn, co-author of my book They Were Just People: Stories of Rescue in Poland During the Holocaust.

Mary took what I would call a sociological and systems approach to the question. In effect, the Jews historically have become scapegoats, she said, because two groups in society could not or would not solve their real problem and decided to ignore that problem by finding a common enemy.

"This antagonism (antisemitism)," she said, "has its foundation. . .simply in human stress and tension and in people's responses to this stress."

When political, social and economic systems function poorly, she said, the result is stress in society and that's a clue "that real problems aren't being addressed. . .In a society that functions poorly, attention is focused on imagined problems, and these imagined problems are blamed on the vulnerable minority groups."

She used the example of Spain in the late 1400s. The rulers and commoners then often were at odds about things and seemed unable or unwilling to fix their problems. So they created a triangle by combining forces and focusing first on those Jews who, for various reasons, already had converted to Christianity. These converts were viewed with suspicion by both the rulers and the commoners. Eventually they began to broaden their focus to include the country's still-Jewish population, as if it were somehow to blame for their troubles.

The result was that in 1492, just as Columbus was landing in the New World, Spain ordered Jews within its borders either to convert to Christianity or to be expelled.

"Two groups in conflict," Greenberg said, "will avoid resolving their own conflict but join forces to force a third vulnerable group into first the scapegoat position and then they become the imagined problem."

Time after time in place after place, that third vulnerable group has been the Jewish community, with the result that antisemitism has become what author David Nirenberg calls "the Western tradition."

I thought Greenberg's triangle explanation, which is drawn from what she calls  Bowen family systems theory, was intriguing and worth additional scholarly attention to unpack it more thoroughly as it relates to antisemitism.

THE RIOTS IN BALTIMORE

Why has Baltimore been burning? A Baltimore Sun columnist says it plainly: It's about race. And this may be one more example of Mary Greenberg's triangulation theory, where a vulnerable minority group gets blamed for things instead of authorities focusing on the real problem.