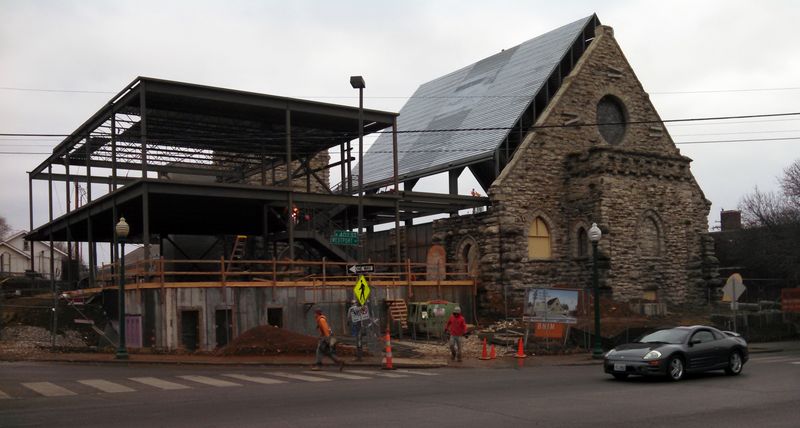 I drove by Westport Presbyterian Church (on Westport Road just west of Main Street) the other day to see the work well under way to rebuild the facility after a terrible December 2011 fire destroyed much, but not all, of the structure.

A congregation named Westport Presbyterian has been around 180 years old, though this is the third congregation to bear all or part of that name, and the old sanctuary is 105 years old. My friend Scott Myers has been pastor there for the last 20 or so years. It's a small but vital congregation to the Midtown area and I'm thrilled to see it coming back to life.

In the period since the fire, the congregation has been meeting at a nearby alternative site and has even had to put up with me as a fill-in preacher on a few occasions.

A few months ago the Kansas City Business Journal did this update on the $11 million construction work at the site, which originally was to be completed by this summer, though that schedule may stretch out into the fall. In any case, it should be a great, celebratory Christmas at Westport.

Westport Presbyterian, though not, as I say, a large congregation, has been an important ministry center and community center for many organizations, including the Westport Center for the Arts. It will be great to have it back in place and serving the Midtown area again in its old location.

Four national Catholic publications have joined forces to spread the message that capital punishment must end. Good. And I'm glad that the National Catholic Reporter, for which I write this column, is among them. The death penalty shames all Americans.