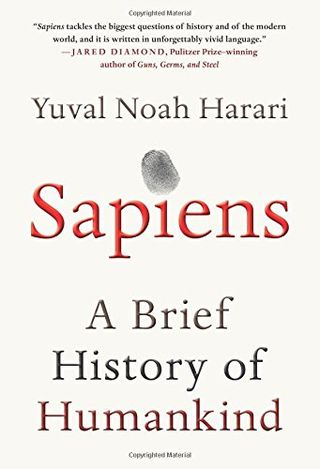 It's easy to find such certitude among people of faith who are convinced they know God's will for all of humanity, who are certain that holy writ must be read as literally true and historically accurate and who already know not only that a real heaven and a real hell exist but also know who ultimately will end up in each one.

Such people of faith are bad enough. Equally distasteful, however, are people of no faith whatsoever who also are absolutely certain of their conclusions about matters of religion.

Which brings me to a hot-selling new book, Sapiens: A Brief History of Humankind, by Yuval Noah Harari, who lectures in the Department of History at Hebrew University of Jerusalem. It's a fascinating read in many ways, and Harari has the ability to cover complex and difficult subjects in accessible language.

However, the book reeks of false certitude about matters of religion.

Harari refers to religion generally as "fiction." He concludes that "not even one" single organism on the planet "was designed by an intelligent creator." He says that "priests and sorcerers have created gods and demons throughout history. . .It all revolved around telling stories, and convincing people to believe them." Among what he calls "fictional entities" is God. And, he insists, humanity has experienced 2,000 years of "monotheistic brainwashing," though it's unclear why he picked 2,000 and didn't take it back another 1,000 or so years to the beginnings of Judaism, which often is given credit for turning monotheism into a dominant religious view in the world.

For Harari, there is no room for debate about these conclusions. They are simply stated as fact in much the same way that a literalist Christian would state as fact that Adam and Eve were real people or that Earth was created in a single day a few thousand years ago.

There is no discussion in Harari about religious belief in revelation as a way of knowing things. The only possible explanation for religious doctrine for him is the fertile imagination of the human brain.

He does call religion "the third great unifier of humankind, alongside money and empires." But in case you think that's something like a compliment, he immediately follows those words with these: "Since all social orders and hierarchies are imagined, they are all fragile, and the larger the society, the more fragile it is. The crucial historical role of religion has been to give superhuman legitimacy to these fragile structures."

The author also seems to buy into the false idea that Christians believe in the idea of the immortal soul. He writes, for instance, of what he calls "the traditional Christian belief in free and eternal individual souls." But the idea of an immortal soul is not a Christian idea. Rather, it's an old Greek idea, which sometimes has slipped into sloppy Christian theology. The contrasting Christian idea to the immortal soul is the doctrine of the resurrection of the body, which affirms that only God is immortal and that if we are to spend eternity in the divine company it will happen not because we possess an immortal soul but because God will give us the gift of eternal life. But I suppose I shouldn't be too hard on Harari for this error, given that many Christians don't understand it either.

Harari does make an interesting point about polytheism, which he says is "inherently open-minded, and rarely persecutes 'heretics' and 'infidels.'" But soon after that good observation, he issues this unwarranted half-truth broadside against monotheists: "Since monotheists have usually believed that they are in possession of the entire message of the one and only God, they have been compelled to discredit all other religions."

I'm not saying that hasn't happened. Indeed, it has happened -- and continues to happen -- much too often. But his "usually" isn't enough in that sentence to account for the many people of monotheistic faiths who advocate living in religious harmony with people of traditions different from their own, including atheists. Such people have no interest in discrediting all other religions.

Well, none of this may matter at all in the long run if Harari is right that the Homo Sapiens species has no more than 1,000 or so years left on the planet. His discussion of genetic engineering and similar developments and what all that means for the future of humanity is worth the price of the book. (We humans, he says, invented gods and now are on our way to becoming gods.) Just don't expect to pick up much useful insight in the book into what faith means today to people of faith and what it has meant to them across the history of humankind.

WHERE IS ISLAM GOING?

It's intriguing that the future of Islam is being debated and pondered in many places around the world, including in the Indian paper called The Hindu in this piece. The money paragraph: "Any discussion on the future of Islam must factor in two things: one is that more Muslims today live in multicultural, open and democratic societies — mostly in the West — with very different notions of individual freedoms and human rights than the tribal cultural values that shaped early Islam and to which the Establishment Islam continues to cling on to. Secondly, the concept of a monolithic global umma, undifferentiated by factors such as race, culture, gender and personal lifestyle choices, is a myth. It is a stereotype that, ironically, has been promoted both by Islam’s critics and its advocates to suit their own different interests."