Within my own lifetime, the Good Friday liturgy of the Catholic Church spoke of "perfidious Jews." This was in harmony with Christianity's long, sad history of anti-Judaism, which I've detailed in this essay. 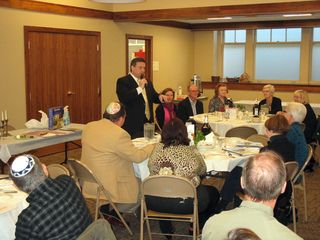 Pope John XXIII finally removed the phrase in 1959 and it was officially left out of the 1962 missal and has been missing ever since.

In the years since then, Catholic-Jewish relations have improved, beginning with the Vatican II document called "Nostra Aetate," in which for the first time the Catholic Church absolved Jews of being guilty of the death of Jesus Christ -- a crime the church had charged them with for century after century. There is still much reparation work to do between Christians and Jews, but at least we no longer have popes creating ghettos in Rome.

This repugnant history came to mind the other day when I received an invitation to attend a seder dinner at a Christian church on Good Friday, April 3.

My friend Rabbi Jacques Cukierkorn will be gathering for this seder meal with members of his synagogue, Temple Israel of Greater Kansas City, at St. Thomas the Apostle Episcopal Church in Overland Park, Kan., where our mutual friend Gar Demo is the priest.

When Temple Israel was being created, it first met at St. Thomas. And this will be the second or third year in a row that T.I. will hold its seder meal there. One year the temple's seder meal was at my congregation, Second Presbyterian Church of Kansas City. (That's the seder you see in the photo here today, with Rabbi Jacques holding the microphone.)

As I say, there's still plenty of work left to do to root out antisemitism from the American culture and especially from many places around the world, where this ancient hatred seems resurgent. But here and there you can find examples of Christians and Jews cooperating and living in such harmony that a synagogue could hold its seder meal on Good Friday inside the walls of a Christian Church. Cheers for that.

Lots of work already is under way to prepare for the visit of Pope Francis to the U.S. in September. My new book, co-authored with my pastor, Paul Rock, is due out just before the pope arrives. It's called Jesus, Pope Francis and a Protestant Walk Into a Bar: Lessons for the Christian Church. If you plan to see the pontiff while he's in this country, we'll give you a copy to present to him. But he has to promise to read it and give us a good Amazon rating.