Just a bit more than a year ago, on Palm Sunday 2014, a man intending to attack Kansas City's Jewish community murdered three people -- two at the Jewish Community Center Campus in Overland Park, Kan., and one at nearby the nearby Village Shalom, a retirement community. 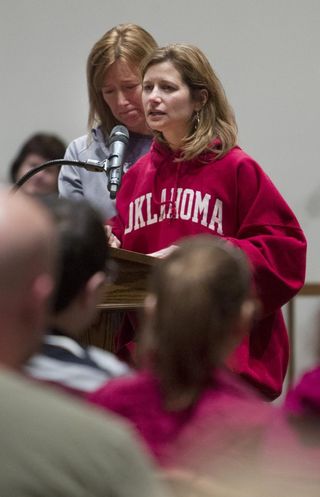 That night I and several others spoke at a prayer service at St. Thomas the Apostle Episcopal Church in Overland Park, not far from the site of the shootings.

It was a terrible day, made all the more disgusting by a man who, even as he was arrested, spouted vicious antisemitic garbage -- as he has continued to do in his continuing court appearances.

Mindy Corporan's father, William Corporan, and her son, Reat Underwood, both were murdered that day, as was Jim LaManno's wife, Teresa. (Those killed, by the way, were all Christians, despite the shooter's efforts to murder Jews.) (The photo here today shows Mindy speaking to the prayer service just a few hours after the deaths of her son and father. She was amazing. The Oklahoma sweatshirt she wore that night? Here's KC Star columnist Vahe Gregorian's recent piece about Mindy's Oklahoma connection.)

Now the Corporan and LaManno families have decided to commemorate the deaths of the three by spearheading a week of hope that they're calling Seven Days -- Make a Ripple, Change the World.

You can read about everything that's planned for April 7-13 this year at the link I've given you in the previous paragraph. I hope that if you live in the KC area, you will find a way to support this effort and join in some of the events.

When I've given talks about my latest book, Woodstock: A Story of Middle Americans, I often have referenced the inspiring way that Kansas Citians -- especially the Corporan and LaManno families -- responded to the vile shootings by evidencing the kind of Midwestern and Middle American values that I write about in the book.

This new week of events gives all of us a chance to show again that darkness does not win in the end.

Creflo Dollar (love the name), a "Prosperity Gospel" preacher, has been asking his followers to help him buy a new $65 million jet, though now, after criticism, he's pulled that request from his social media pages. Dollar, whose net worth is said to run to 27 million of those dollars, is the kind of preacher who gives all clergy a bad name, even though most of them are hard-working and underpaid. And the Prosperity Gospel is a wicked perversion of the gospel. Period.

P.S.: Speaking of overcoming darkness with love, as I was earlier here, yesterday was a good day for my denomination, the Presbyterian Church (USA). We finally approved a definition of marriage that includes gay couples. About time.