Kansas City is mourning the death of a fabulous Catholic priest, Norman Rotert (pictured here), whom I was privileged to know for some 40 years and whom I considered a friend. 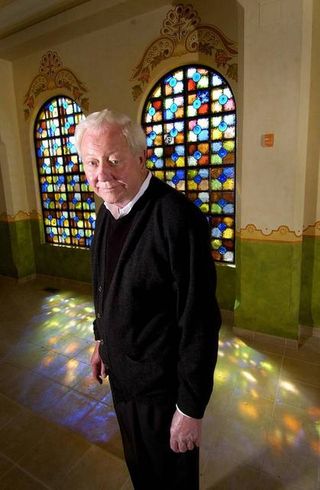 Norm died this past Wednesday at age 83 after a period of decline in recent years.

My former Kansas City Star colleague Mary Sanchez did this lovely tribute to this remarkable, wise and gentle man and servant of both God and people -- a man described several times in a prayer service this past Sunday evening as "a 21st Century priest" ahead of his time.

I first met Norm when he was priest at St. Therese Little Flower Catholic Church in the 1970s. He and I and a mutual friend who worked then for the U.S. Department of Housing and Urban Development used to meet to think aloud about racial turnover in neighborhoods and what might be done to redeem neighborhoods that had declined for many reasons. Out of those conversations came such Norm-driven efforts as the Blue Hills Homes Corporation, which sought to be a stabilizing and healing presence.

When I decided to do a Kansas City Star series of articles about racial turnover in a particular block of southeast Kansas City, I picked the block on which St. Therese Little Flower was located and Norm helped me with introductions to neighbors. The hardest thing in that period was when a neighborhood boy attacked Norm with a broken glass pop bottle and Norm wound up at Research Hospital with his face sliced up. I remember visiting him there and I recall his difficult feelings about why someone in the neighborhood he was committed to helping would have targeted him for robbery and violence.

Later I had many dealings with Norm when he was vicar general of the Catholic Diocese of Kansas City-St. Joseph and when he was a priest in other parishes, including his final assignment at Visitation Catholic Parish, where he oversaw a major renovation of the structure just before his retirement. After he left, I wrote that parish's centennial book and relied on Norm and other former priests there to help me understand that wonderful parish.

Back in the late 1990s for a few years, the editorial page staff of The Kansas City Star, on which I served, wrote occasional tributes to people we called "Community Stars." In Norm's honor today, I'd like to repeat here the one I wrote about him in June 1997:

Dedicated to the common good, The Rev. Norman Rotert helps people use their gifts

Forty years after his ordination as a Roman Catholic priest, the Rev. Norman Rotert is clear about what drives him to be such a force for community betterment in Kansas City: "I have a strong commitment to the common good,'' he says. "One of the most destructive tendencies within current American society is this movement toward individualism and the unwillingness of people to sacrifice their individual good for the common good.'' Father Rotert is our Community Star this week not just because of his many years of service to his church, which one might expect from any priest, but because his service to the whole Kansas City community has exemplified his own willingness to work for the common good.

"I've always loved a challenge,'' he says. "I get bored when things are going well and running like clockwork. I want to move on to someplace else where there's a challenge of creating a vision and gathering people around that vision.'' That's exactly what he did in the mid-1970s in an area of Kansas City that had been severely damaged by various forces leading to rapid racial turnover and neighborhood deterioration. While he was pastor of St. Therese Little Flower Church at 5814 Euclid, he helped organize the Blue Hills Homes Corp. for that area and has served until recently as its board chairman.

The homes corporation, which honored him recently, tried in its early days to fight white flight, block busting and other pressures leading to neighborhood destabilization. It bought and fixed up homes and started selling and renting them to families with low and moderate incomes.

The corporation, once hundreds of thousands of dollars in debt, now has an annual budget of $5 million and has persistently tried to create safe and decent housing for families.

Father Rotert has not given all his energy to that single project. He's also worked with (and in some cases helped to start) Kansas City Consensus, the Kansas City Church Community Organization and Catholic Charities. He's now at Visitation Church, but has served in several other parishes and, for a time, was vicar general of the Kansas City-St. Joseph diocese.

Why does he do so much more than simply stay within the walls of his church to perform priestly functions?

"I think it's my theology,'' he says. "I believe that God saves a people, and that individuals get caught up in that ... And if we're going to help build the kingdom of God on Earth we build up a people of God. That especially means focusing on people who are most in need of help at whatever point in their life they need help. It's very orthodox Catholic theology.'' To do that, Rotert sees his job as an enabler.

"I think my role is gathering the vision and articulating it, then gathering people around it and then getting out of the way and letting them move within the parameters of the vision,'' he says.

And his job is to encourage individuals to see their own importance in the context of a community.

"Whatever people do in their life's work builds up the society, the community and -- if they see it in the faith context -- it builds up the kingdom of God,'' he said. "No one's contribution is inconsequential.'' Rotert says his work now is primarily focused on the active and richly talented Visitation parish near the Country Club Plaza.

"This is a very strong parish with lots of gifts and resources and human talent and networks,'' he says. So he'll be asking, "How do we gather up the vision here? How does the church structure itself to best encourage people to give their gifts to the city and beyond?'' As usual, Father Rotert is seeing the big picture.

Rest in peace, Norm. You've been a gift to us.

This Washington Post piece explores a question that no doubt has been at the top of your list for some years: Why isn't anyone writing Christmas songs that become classics any more? What? You haven't been wondering that? Then maybe next we need a piece about why people haven't been asking that question. Or not.

P.S.: Yesterday marked the 10th anniversary of this blog. Today we slip into year 11. As I told my Facebook friends (surely you're one of them) yesterday, it's been a decade of wisdom, beauty and enlightenment (and all the right opinions) at top speed. And it's all been free to you. You're welcome.