COVINGTON, La. -- Dozens of kids faced John Price, the man who oversees the Insta-Gator Alligator Ranch here north of New Orleans, and a 10-year-old girl had a challenging question: 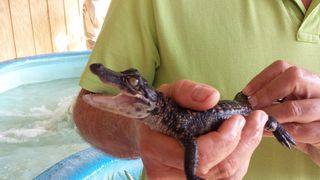 "So you kill God's creatures?"

John (he's holding the baby gator in the photo at right) said he paused. Then he acknowledged that was exactly what happened to many of the alligators raised on the ranch. But he didn't stop there.

In the end, it was a lesson in responsible and careful stewardship of the Earth -- the very Earth people of faith believe God created.

Price says he does this work under the auspices of the Louisiana Wildlife and Fisheries' successful alligator program because "we are stewards of the Earth. I started out in the oil and gas industry and wanted to spend more time with my family and move to the country."

So in the late 1980s he got into the business of helping to save an alligator population that was dwindling dangerously because "man was consuming them without regard." In 25 years the state's alligator population has increased six fold and now is sustainable, in large part because of alligator ranches like Price's and 31 others around the state.

Price, who lives on the ranch with his family, likes to note the irony that "the people consuming nature are the very same ones conserving nature."

Price and his crew collect alligator eggs in the wild and bring them to the ranch to hatch. Currently, under state guidance, 12 percent of the baby alligators are returned to the wild and 88 percent are used for meat and leather.

Environmental matters can be complicated and seemingly contradictory. But I'm thinking it would be cool if maybe one day that 10-year-old girl who challenged Price about killing God's creatures joined the Insta-Gator Ranch crew and helped protect the creatures she was worried about.

THE FAULT IS NOT RELIGION'S

I'm hearing lots of good things about Karen Armstrong's new book, Fields of Blood. So here's a story about it, making the point that Armstrong doesn't blame religion for most wars. Other factors were primary, she contends. I haven't had a chance to read the book yet but feel free to give it to me for Christmas.