What happens when religion gets twisted, subverted, used in evil ways? 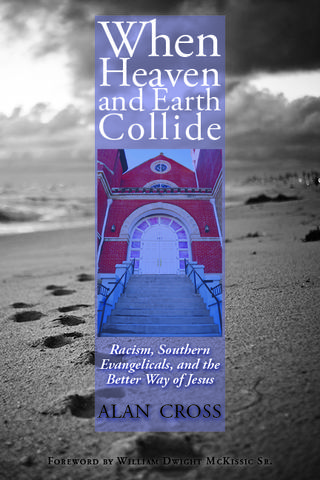 Almost certainly that question brings to your mind the ways in which Islamist terrorists have hijacked Islam and used it to justify violence and other forms of extremism.

And you'd be right. But that's not what I'm thinking about today. Rather, I'm thinking about how self-described Christian white evangelicals in the American South subverted their faith first to support the malevolent institution of slavery and then to oppose nearly all aspects of the Civil Rights Movement in the 1950s and onward.

That's the subject of When Heaven and Earth Collide: Racism, Southern Evangelicals, and the Better Way of Jesus, a new book by Alan Cross, pastor of a Southern Baptist church in Montgomery, Ala.

Cross examines his own shock when he learned about the vicious ways in which Southern white people who called themselves Christians subverted their religion to work against racial equality.

"The segregated South," he writes, "was a culture built on lies -- lies about what life was all about, lies about what God desired of his people, and lies about how people different from one another were to be treated. Identity was based on characteristics like the color of one's skin, instead of matters of the heart and the content of a man's character and the state of a man's soul before God."

His purpose here is to understand "the struggle involving racism and segregation that has been largely ignored," including "the collusion between white evangelicals and the structures of Jim Crow in the segregated South." What happened, he says, is that "a cultural/civil religion developed, which ultimately undermined their biblical witness both during those events and on to the present day."

It's a sad, disturbing story of religion that became so focused on individual piety and salvation that its adherents ignored the deeper, broader call for justice and mercy and redemption of the whole society.

Cross wisely points out how similar subversion of Christianity happened in various ways at various times in history, from the era of so-called Christendom, when the faith was in cahoots with government, to the Crusades, when promises of easy access to heaven drove Christians to slaughter Jews and Muslims in an effort to recapture the Holy Land, to the Spanish Inquisition and to the many ways the church in Nazi Germany betrayed itself and supported (or stood silent in the face of) even Hitler's most audacious evil, the Holocaust.

This long, sad history does not discount the reality that even while such subversion was happening, Christians also were doing acts of mercy and kindness. But it is, nonetheless, a stark history full of warnings about failing to stand for the mandates of love and sacrifice and sacramental living to which the faith at its core calls its followers. Instead, white evangelicals in the South, Cross argues, "concerned most notably with personal morality, order in society, and social sins related to alcohol and sex were not able to see the larger evil that was emerging in the culture."

He wrote those words about Baptists who visited Berlin in 1934 and had words of praise and support for Hitler. But they also apply to Baptists and others in the South in the Civil Rights era and sometimes even today.

This is a necessary book by a man steeped in the white evangelical tradition but willing to expose what went wrong there. It would be easy for Christians in a different tradition to call down shame on those white Southerners for their failures, but every tradition has its own failures that need this kind of intense scrutiny so they don't continue into the future.

NOT EXACTLY THE SECOND COMING

Once again, what appears to be a mental disorder issues in religiously bizarre behavior -- this time by a hair transplant surgeon who says he's Jesus Christ. And once again we're left wondering why mentally off-balance people so often drift into religious strangeness. I can't explain it.