Is there anything more mysterious, more presumptive or even more arrogant than prayer? 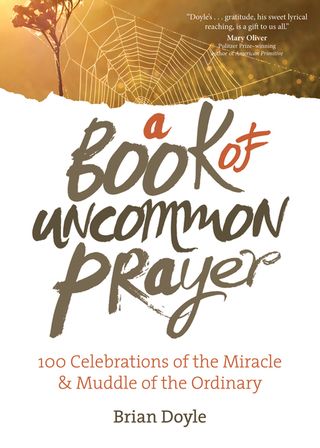 What makes us imagine that the Creator of the cosmos, the Divine Conductor, the Intelligent Designer, the Original Impulse of Love wants to hear from us or has anything to say to us if we shut up and really, really, really listen?

And yet every day all over the planet you can find people engaging in sincere or rote or 9-1-1 or thankful prayer. Even people who would describe themselves as agnostic or atheist sometimes whisper a "Please, God," prayer, whether it's for the cure of some viscious disease or simply for an open parking space to show up like grace.

But in my experience, the prayer life of most people is pretty limited, pretty staid -- rarely flying off into imaginative realms or drilling down to the simplest of subjects.

It's exactly those kinds of uncommon prayers that you will find in Brian Doyle's delicious new book, A Book of Uncommon Prayer: 100 Celebrations of the Miracle & Muddle of the Ordinary.

These are rich, dark-chocolate prayers. But also light, airy, drive-by prayers. Both at once sometimes. And what they mostly reveal is Doyle's Catholic ability to adopt the Buddhist admonition to notice, to pay attention, to be mindful.

If I were to paraphrase one of these prayers here it would be like trying to describe a mystical spiritual moment. Any words I would use would fail. So, instead, I will simply offer you one of my favorites from this collection -- one that, from a Christian perspective, reflects spot-on theology of the kind Pope Francis has been seeking to reawaken the church to since his election in early 2013.

The prayer is called (the titles sometimes are as good as the prayers themselves): "Furious Prayer for the Church I Love and Have Always Loved but Which Drives Me Insane with Its Fussy Fidgety Prim Tin-Eared Thirst for Control and Rules and Power and Money Rather Than the One Simple Thing the Founder Insisted On." And it goes like this:

Granted, it's a tough assignment, the original assignment. I get that. Love -- Lord help us, could we not have been assigned something easier, like astrophysics or quantum mechanics? But no -- love those you cannot love. Love those who are poor and broken and fouled and dirty and sick with sores. Love those who wish to strike you on both cheeks. Love the blowhard, the pompous ass, the arrogant liar. Find the Christ in each heart, even those. Preach the Gospel and only if necessary talk about it. Be the Word. It is easy to advise and pronounce and counsel and suggest and lecture; it is not so easy to do what must be done without sometimes shrieking. Bring love like a bright weapon against the dark. The Rabbi did not say build churches, or retreat houses, or secure a fleet of cars for general use, or convene conferences, or issue position papers. He was pretty blunt about the hungry and the naked and the sick. He was not reasonable; we forget this. The Church is not a reasonable idea. The Church should be a verb. When it is only a noun it is not what the Founder asked of us. Let us pray that we are ever after dissolving the formal officious arrogant thing that wants to rise, and ever fomenting the contradictory revolutionary counter-cultural thing that could change life on this planet. It could, you know. Let's try again today. And so: amen.

Could I argue with Doyle about whether Jesus really was the "Founder" of Christianity? Yes, but it would be a tedious argument with both of us dancing with angels on pinheads while being ourselves pinheads for not focusing instead on what is important, so let it go.

There are dozens and dozens of prayers in the book like the one I just gave you here. If you try to digest them in one sitting, you will perish, almost certainly. But if you are careful, you can get a refreshing drink from this firehose of prayer.

A HUMAN TO HUMAN GESTURE

Even in the midst of sadness and angst in Jerusalem over the murder of four rabbis in a synagogue, a small light of hope appears as an Arab delegation comes to pay respects for the dead. There are, despite much evidence to the contrary, good human beings almost everywhere. Maybe there's even hope somewhere in Ferguson, Mo.